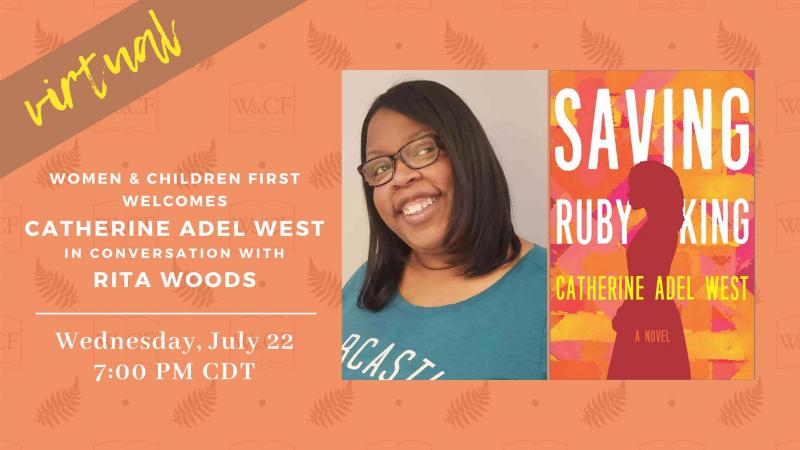 Please join us for a virtual conversation with Catherine Adel West and Rita Woods in celebration of West's debut novel, Saving Ruby King.

This event will be streamed on Women & Children First's Crowdcast Channel

Attendees can register through Eventbrite HERE or directly through Crowdcast.

Named a Most Anticipated Book of 2020 by Ms. Magazine, USA Today Book Riot, The Rumpus, Library Journal, PureWow, The Every Girl, Parade and more.

"In the midst of widespread protests and calls to end racial injustice, the conversations and understanding tackled in Saving Ruby King are all significant reflections of this country's reality today." - Parade Magazine

"Forever and to the end. That's what they say instead of I love you."

When Ruby King's mother is found murdered in their home in Chicago's South Side, the police dismiss it as another act of violence in a black neighborhood. But for Ruby, it's a devastating loss that leaves her on her own with her violent father. While she receives many condolences, her best friend, Layla, is the only one who understands how this puts Ruby in jeopardy.

Their closeness is tested when Layla's father, the pastor of their church, demands that Layla stay away. But what is the price for turning a blind eye? In a relentless quest to save Ruby, Layla uncovers the murky loyalties and dangerous secrets that have bound their families together for generations. Only by facing this legacy of trauma head-on will Ruby be able to break free.

An unforgettable debut novel, Saving Ruby King is a powerful testament that history doesn't determine the present and the bonds of friendship can forever shape the future.

RITA WOODS is a family doctor and the director of a wellness center. When she's not busy working or writing, Dr. Woods spends time with her family or at the Homer Glen library where she serves on the Board of Trustees. Remembrance is her first novel.

CATHERINE ADEL WEST graduated with both her BS and MS in journalism from the University of Illinois, Urbana-Champaign. Her work has been published in Gay Magazine, Black Fox Literary Magazine, Five2One, Better Than Starbucks, and others. Catherine was born and raised in Chicago. Saving Ruby King is her debut novel.