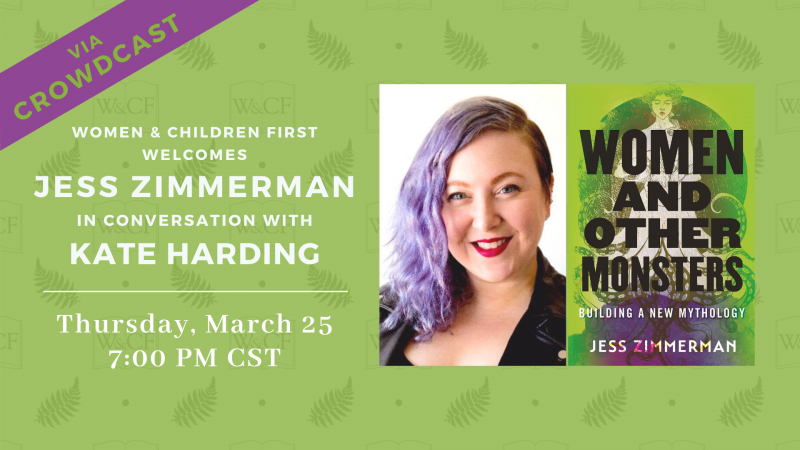 Join us on our Crowdcast Channel for a virtual conversation in honor of Women and Other Monsters: Building a New Mythology by Jess Zimmerman. For this event, ZImmerman will be in conversation Kate Harding.

A fresh cultural analysis of female monsters from Greek mythology, and an invitation for all women to reclaim these stories as inspiration for a more wild, more "monstrous" version of feminism

The folklore that has shaped our dominant culture teems with frightening female creatures. In our language, in our stories (many written by men), we underline the idea that women who step out of bounds--who are angry or greedy or ambitious, who are overtly sexual or not sexy enough--aren't just outside the norm. They're unnatural. Monstrous. But maybe, the traits we've been told make us dangerous and undesirable are actually our greatest strengths.

Through fresh analysis of eleven female monsters, including Medusa, the Harpies, the Furies, and the Sphinx, Jess Zimmerman takes us on an illuminating feminist journey through mythology. She guides women (and others) to reexamine their relationships with traits like hunger, anger, ugliness, and ambition, teaching readers to embrace a new image of the female hero: one that looks a lot like a monster, with the agency and power to match.

Often, women try to avoid the feeling of monstrousness, of being grotesquely alien, by tamping down those qualities that we're told fall outside the bounds of natural femininity. But monsters also get to do what other female characters--damsels, love interests, and even most heroines--do not. Monsters get to be complete, unrestrained, and larger than life. Today, women are becoming increasingly aware of the ways rules and socially constructed expectations have diminished us. After seeing where compliance gets us--harassed, shut out, and ruled by predators--women have never been more ready to become repellent, fearsome, and ravenous.

Jess Zimmerman is the editor in chief of Electric Literature. Her essays, fiction, opinion pieces, and prose poetry have appeared in publications including Vice, Slate, The Cut, the Washington Post, The Guardian, and the New Republic. She lives in Brooklyn. Connect with her @j_zimms.

Kate Harding is the author of two books of nonfiction, the second, Victim Complex: On Snowflakes, Witch Hunts, and the Cult of Personal Responsibility will be out in 2022. She is the co-author of The Book of Jezebel and Lessons from the Fat-o-Sphere. With Samhita Mukhopadhyay, she co-edited the 2017 anthology Nasty Women and co-hosted the podcast "Feminasty." She's been teaching creative writing since 2010 and was Distinguished Visiting Writer at Cornell College in 2017. Kate studied English at University of Toronto, publishing at Ryerson University, and creative writing at Vermont College of Fine Arts and Bath Spa University, where she earned her MFA in Fiction and PhD in Nonfiction, respectively. She has also been a columnist, blogger, editor, book publicist, bank teller, and day care provider and would do most of those things again, if you're hiring. She lives in Chicago.

Women and Other Monsters: Building a New Mythology (Hardcover)