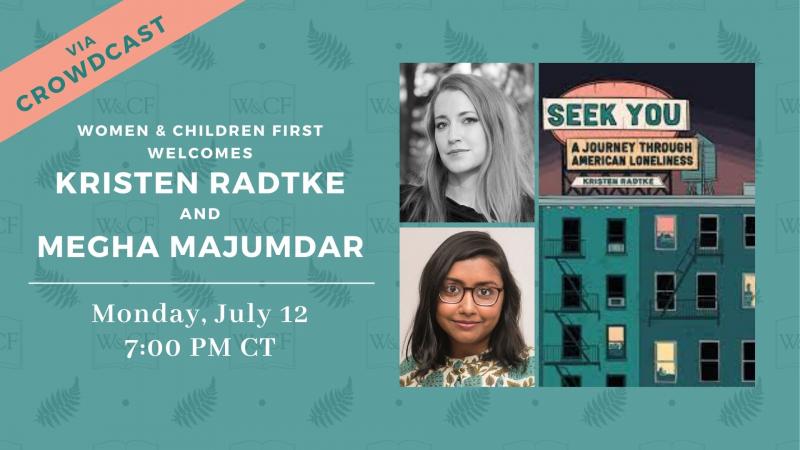 Join us for a reading and conversation celebrating Seek You: A Journey through American Loneliness by Kristen Radtke. For this event, Radtke will be in conversation with Megha Majumdar.

From the acclaimed author of Imagine Wanting Only This--a timely and moving meditation on isolation and longing, both as individuals and as a society. - One of Lit Hub's Most Anticipated Books of 2021

There is a silent epidemic in America: loneliness. Shameful to talk about and often misunderstood, loneliness is everywhere, from the most major of metropolises to the smallest of towns.

In Seek You, Kristen Radtke's wide-ranging exploration of our inner lives and public selves, Radtke digs into the ways in which we attempt to feel closer to one another, and the distance that remains. Through the lenses of gender and violence, technology and art, Radtke ushers us through a history of loneliness and longing, and shares what feels impossible to share.

Ranging from the invention of the laugh-track to the rise of Instagram, the bootstrap-pulling cowboy to the brutal experiments of Harry Harlow, Radtke investigates why we engage with each other, and what we risk when we turn away. With her distinctive, emotionally-charged drawings and deeply empathetic prose, Kristen Radtke masterfully shines a light on some of our most vulnerable and sublime moments, and asks how we might keep the spaces between us from splitting entirely.

KRISTEN RADTKE is the author of the graphic nonfiction book Imagine Wanting Only This. The recipient of a 2019 Whiting Creative Nonfiction Grant, Radtke is the art director and deputy publisher of The Believer. Her work has appeared in The New York Times, Marie Claire, The Atlantic, The Guardian, GQ, Vogue, and Oxford American, among many other publications.

MEGHA MAJUMDAR was born and raised in Kolkata, India. She moved to the United States to attend college at Harvard University, where she was a Traub Scholar, followed by graduate school in social anthropology at Johns Hopkins University. She works as an associate editor at Catapult, and lives in New York City. A Burning is her first book. Follow her on Twitter @MeghaMaj and Instagram @megha.maj

Seek You: A Journey Through American Loneliness (Hardcover)

A Burning: A novel (Paperback)