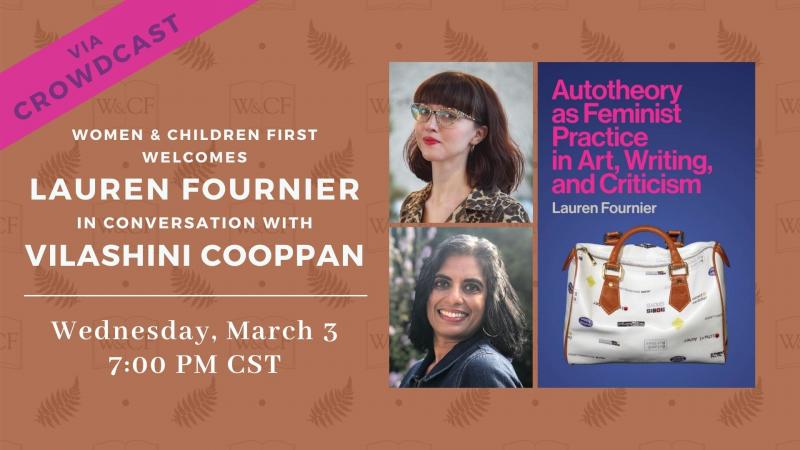 Please join us on Women & Children First's Crowdcast Channel for a virtual conversation celebrating the release of Autotheory as Feminist Practice in Art, Writing, and Criticism by Lauren Fournier. For this event, Lauren will be in conversation with Vilashini Cooppan.

In the 2010s, the term "autotheory" began to trend in literary spheres, where it was used to describe books in which memoir and autobiography fused with theory and philosophy. In this book, Lauren Fournier extends the meaning of the term, applying it to other disciplines and practices. Fournier provides a long-awaited account of autotheory, situating it as a mode of contemporary, post-1960s artistic practice that is indebted to feminist writing, art, and activism. Investigating a series of works by writers and artists including Chris Kraus and Adrian Piper, she considers the politics, aesthetics, and ethics of autotheory.

Lauren Fournier is a writer, curator, and filmmaker who writes autotheories and autofictions for the page and the screen. She is currently a SSHRC Postdoctoral Fellow in Visual Studies, where she is working with Lisa Steele on a studio-based project that extends an autotheoretical approach to a critical consideration of whiteness, settler-colonialisms, and class. She has co-edited a special issue of ASAP/Journal on "autotheory" with her collaborator Alex Brostoff, which will be launched at UC Berkeley in May. Her first two books, an academic monograph through The MIT Press and an autofictional novel through Fiction Advocate are forthcoming in winter and spring 2021.

Vilashini Cooppan is Professor of Literature at the University of California at Santa Cruz, where she teaches comparative and world literature, with an emphasis on postcolonial theory, genre theory, memory studies, and affect theory. Her work on memory and trauma has appeared in the Hong Kong-based journal Concentric, the Dutch/German volume, Trauma, Memory, and Narrative in the Contemporary South African Novel, and the journals Qui Parle and Critical Times.  She has an essay on autotheory forthcoming in a special issue of ASAP edited by Lauren Fournier and Alex Brostoff.  She is the author of Worlds Within: National Narratives and Global Connections in Postcolonial Writing (Stanford UP, 2009) and is completing a book titled The World at Large: Memoryscapes in World Literature.

Autotheory as Feminist Practice in Art, Writing, and Criticism (Hardcover)