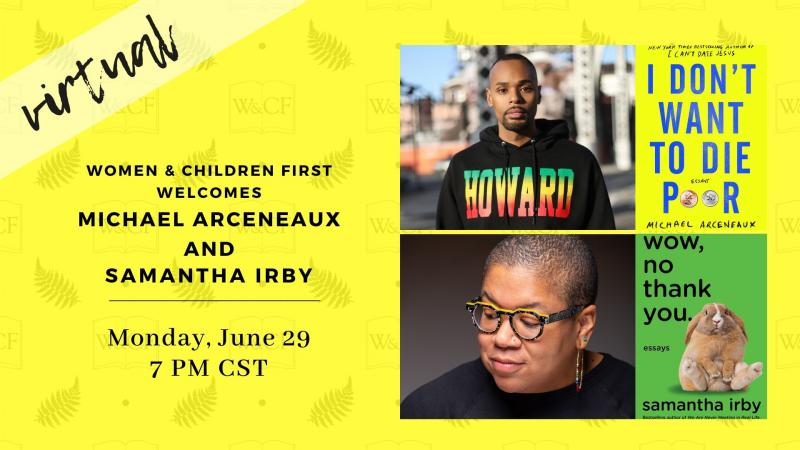 Join us for a virtual conversation with Michael Arceneaux and Samantha Irby! The Crowdcast access link will be emailed to registrants the day of the event.

Register HERE for this virtual event! Registrants will be emailed an access link.

Ever since Oprah Winfrey told the 2007 graduating class of Howard University, “Don’t be afraid,” Michael Arceneaux has been scared to death. You should never do the opposite of what Oprah instructs you to do, but when you don’t have her pocket change, how can you not be terrified of the consequences of pursuing your dreams?

Michael has never shied away from discussing his struggles with debt, but in I Don’t Want to Die Poor, he reveals the extent to which it has an impact on every facet of his life—how he dates; how he seeks medical care (or in some cases, is unable to); how he wrestles with the question of whether or not he should have chosen a more financially secure path; and finally, how he has dealt with his “dream” turning into an ongoing nightmare as he realizes one bad decision could unravel all that he’s earned. You know, actual “economic anxiety.”

I Don’t Want to Die Poor is an unforgettable and relatable examination about what it’s like leading a life that often feels out of your control. But in Michael’s voice that’s “as joyful as he is shrewd” (BuzzFeed), these razor-sharp essays will still manage to make you laugh and remind you that you’re not alone in this often intimidating journey.

Michael Arceneaux is the New York Times bestselling author of I Can’t Date Jesus: Love, Sex, Family, Race, and Other Reasons I’ve Put My Faith in Beyoncé. He has written for The New York Times, The Washington Post, Essence, Esquire, Ebony, Elle, Rolling Stone, and many other publications on and off Al Gore’s internet. He’s ran his mouth on MSNBC, NPR, VH1, Viceland, Comedy Central, SiriusXM, and elsewhere.

Samantha Irby is the author of the acclaimed essay collection Meaty and the New York Times Bestsellers Wow, No Thank You and We Are Never Meeting in Real Life. She lives in Kalamazoo, Michigan and writes the blog bitches gotta eat.