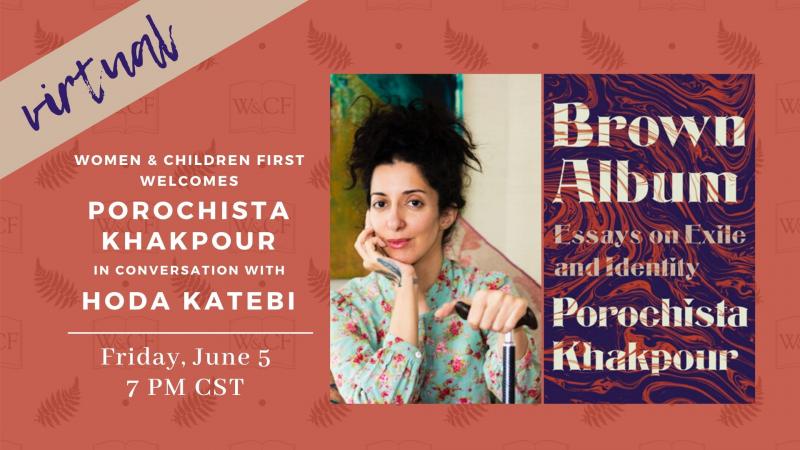 To receive access to this free event, REGISTER HERE!  Registrants will be emailed an access link the week of the event.

Novelist Porochista Khakpour's family moved to Los Angeles after fleeing the Iranian Revolution, giving up their successes only to be greeted by an alienating culture. Growing up as an immigrant in America means that one has to make one's way through a confusing tangle of conflicting cultures and expectations. And Porochista is pulled between the glitzy culture of Tehrangeles, an enclave of wealthy Iranians and Persians in LA, her own family's modest life and culture, and becoming an assimilated American. Porochista rebels--she bleaches her hair and flees to the East Coast, where she finds her community: other people writing and thinking at the fringes. But, 9/11 happens and with horror, Porochista watches from her apartment window as the towers fall. Extremism and fear of the Middle East rises in the aftermath and then again with the election of Donald Trump. Porochista is forced to finally grapple with what it means to be Middle-Eastern and Iranian, an immigrant, and a refugee in our country today.

Brown Album is a stirring collection of essays, at times humorous and at times profound, drawn from more than a decade of Porochista's work and with new material included. Altogether, it reveals the tolls that immigrant life in this country can take on a person and the joys that life can give.

Porochista Khakpour's debut novel, Sons and Other Flammable Objects, was a New York Times Editor's Choice, one of the Chicago Tribune's Fall's Best, and the 2007 California Book Award winner in the First Fiction category. Her second novel The Last Illusion was a 2014 "Best Book of the Year" according to NPR, Kirkus Reviews, BuzzFeed, PopMatters, Electric Literature, and many more. Among her many fellowships is a National Endowment for the Arts award. She is the author of the memoir Sick and her nonfiction has appeared in many sections of The New York Times, the Los Angeles Times, and Bookforum, among many others. She has been guest faculty at VCFA and Stonecoast's MFA programs, as well as Contributing Editor at Evergreen Review. Born in Tehran and raised in the Los Angeles area, Khakpour currently lives in New York City.

Hoda Katebi is the Chicago-based angry writer/daughter of Iranian immigrants. Her creative political fashion work has been hailed from the BBC to the New York Times to the pages of VOGUE and featured/cited in books, journals, and museums around the world. Hoda is the host of #BecauseWeveRead, a radical book club and discussion series with chapters globally; founder of Blue Tin Production, an all-women immigrant & refugee-run apparel manufacturing workers co-operative; and organizer with Believers Bail Out, a national effort using zakat to bail Muslims out from pretrial & immigration incarceration. Hoda is an abolitionist and community organizer, previously part of campaigns to end surveillance programs and police militarization. She graduated from the University of Chicago in 2016 where her research explored the intersections of fashion, gender, and the state in Iran, and will be starting law school in the fall of 2020. Hoda runs on saffron ice cream & colonizer tears.