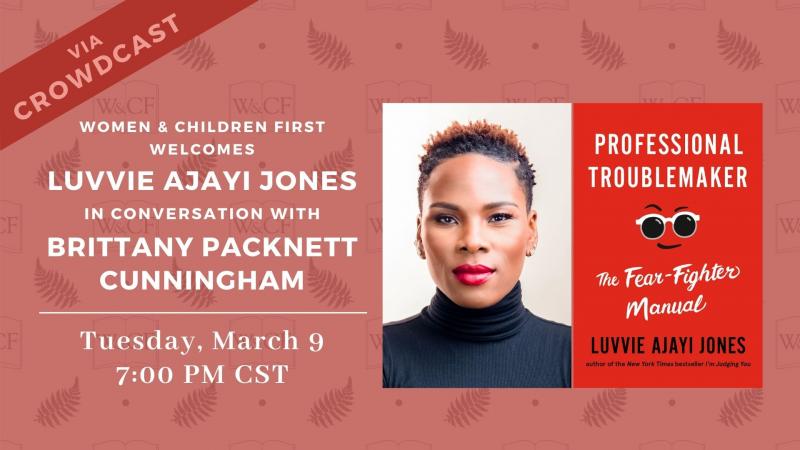 For this event, Luvvie Ajayi Jones will be in conversation with Brittany Packnett Cunningham! This ticketed event will be held on Women & Children First's Crowdcast Channel. Attendees must purchase the book to attend. Attendees will also receive a free "Judgey Pop" with their ticket purchase.

From the New York Times bestselling author of I'm Judging You, a hilarious and transformational book about how to tackle fear--that everlasting hater--and audaciously step into lives, careers, and legacies that go beyond even our wildest dreams

Luvvie Ajayi Jones is known for her trademark wit, warmth, and perpetual truth-telling. But even she's been challenged by the enemy of progress known as fear. She was once afraid to call herself a writer, and nearly skipped out on doing a TED talk that changed her life because of imposter syndrome. As she shares in Professional Troublemaker, she's not alone.

We're all afraid. We're afraid of asking for what we want because we're afraid of hearing "no." We're afraid of being different, of being too much or not enough. We're afraid of leaving behind the known for the unknown. But in order to do the things that will truly, meaningfully change our lives, we have to become professional troublemakers: people who are committed to not letting fear talk them out of the things they need to do or say to live free.

With humor and honesty, and guided by the influence of her professional troublemaking Nigerian grandmother, Funmilayo Faloyin, Luvvie walks us through what we must get right within ourselves before we can do the things that scare us; how to use our voice for a greater good; and how to put movement to the voice we've been silencing--because truth-telling is a muscle.

The point is not to be fearless, but to know we are afraid and charge forward regardless. It is to recognize that the things we must do are more significant than our fears. This book is about how to live boldly in spite of all the reasons we have to cower. Let's go!

Luvvie Ajayi Jones is an award-winning author, speaker, and podcast host, who thrives at the intersection of comedy, media and justice. She is the author of the New York Times bestseller I'm Judging You: The Do-Better Manual, and her site, AwesomelyLuvvie, is where she covers all things culture with a critical yet humorous lens. She is co-founder of the #SharetheMicNow global movement and runs her own social platform, LuvvNation, which is a safe space in a dumpster fire world.

Brittany Packnett Cunningham is a social justice activist, educator and writer. She is an NBC News and MSNBC contributor and host of UNDISTRACTED, an intersectional news and social justice podcast. She is the former co-host of iHeart Radio’s Best Political Podcast of 2019, Pod Save The People, and is the founder and principal of Love & Power Works, a full-service social impact and equity agency. Brittany’s forthcoming book, We Are Like Those Who Dream, is due to hit shelves in 2021. Brittany was a member of President Obama’s 21st Century Policing Task Force and the Ferguson Commission, helping lead the country and her community through change during times of tumult. Brittany graced the covers of British Vogue and Essence Magazine, been listed as one of Time’s 12 New Faces of Black Leadership, and has been honored by BET, Politico Magazine, Marie Claire, The Trayvon Martin Foundation, and more. She serves on the Gucci Changemakers Council and lives with her husband in Washington, DC.