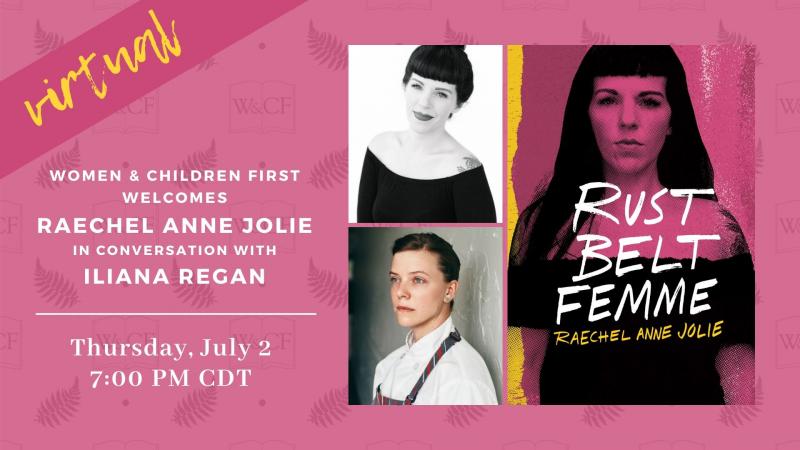 Join us for a virtual reading and conversation for Rust Belt Femme by Raechel Anne Jolie. For this event, Jolie will be in conversation with Iliana Regan.

This event will be streamed on Women & Children First's Crowdcast Channel. Click HERE to register!

Raechel Anne Jolie's early life in a working-class Cleveland exurb was full of race cars, Budweiser-drinking men covered in car grease, and the women who loved them. After her father came home from his third-shift job, took the garbage out to the curb and was hit by a drunk driver, her life changed. Raechel and her mother struggled for money: they were evicted, went days without utilities, and took their trauma out on one another. Raechel escaped to the progressive suburbs of Cleveland Heights, leaving the tractors and ranch-style homes home in favor of a city with vintage marquees, music clubs, and people who talked about big ideas. It was the early 90s, full of Nirvana songs and chokers, flannel shirts and cut-off jean shorts, lesbian witches and local coffee shops. Rust Belt Femme is the story of how these twin foundations--rural Ohio poverty and alternative 90s culture--made Raechel into who she is today: a queer femme with PTSD and a deep love of the Midwest.

Raechel Anne Jolie is a writer, educator, and media-maker living in Minnesota. She holds a PhD in Critical Media Studies, with a minor in Feminist & Critical Sexuality Studies from the University of Minnesota, and has taught in colleges and universities in Chicago, Minneapolis, and Boston. Her writing has been featured in numerous academic journals, as well as popular press outlets such as Teen Vogue, In These Times, Bitch Magazine, and more. She is also the editor of The Prison Arcana Tarot Zine, made in collaboration with c.l. young, who is currently incarcerated. She loves her cats, her given and chosen family, and has unwavering faith in the power of the people. This is her first memoir.

Iliana Regan is a self-taught chef. She is the founder and owner of the Michelin- starred “new gatherer” restaurant Elizabeth in Chicago and of Milkweed Inn, a bed and breakfast located on 150 wooded acres in Michigan’s Upper Peninsula. Her cuisine highlights her Midwestern roots and the pure flavors of the often foraged ingredients of her Indiana upbringing. A James Beard and Jean Banchet Award nominee, Regan was named one of Food & Wine’s Best New Chefs of 2016. Regan is the author of Burn the Place: A Memoir, which was longlisted for the 2019 National Book Award for Nonfiction. She and her wife, sommelier Anna Hamlin, split their time between Chicago and Michigan with their three dogs, Bear, George, and Bunny.

Accessibility: Our store is wheelchair accessible and has one accessible restroom. Seating is first-come, first-serve, but we are happy to reserve seats for people with disabilities. We have LED lighting that can be adjusted with dimmers. Please call the store at 773-769-9299 the day of the event if you need a reserved seat or have additional questions.