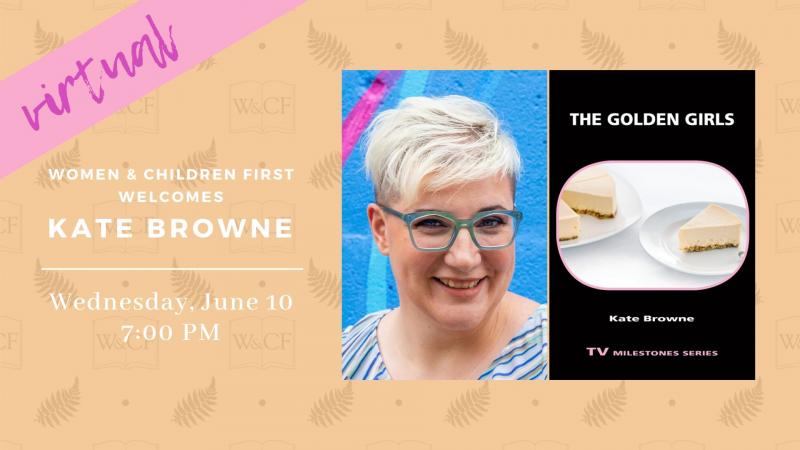 Join us for a virtual conversation with Kate Browne for her new book, The Golden Girls! This event will be held on Crowdcast. Access link coming soon!

Register HERE for this free event or just check back here for the Crowdcast link.

Since June is Pride month, we'll talk about Lebanese--sorry, lesbians, how important it was for Clayton and Doug to get MARRIED, and the curious characterization of Phil Zbornak.

The Golden Girls made its prime-time debut in 1985 on NBC, and the critically acclaimed show has been a constant television companion through cable reruns and streaming media services ever since. Most people know that The Golden Girls is a sitcom about four feisty, older women living together in Miami who love to eat cheesecake, but Kate Browne argues that The Golden Girls is about so much more. Drawing on feminist literary studies and television studies, Browne makes a case for The Golden Girls as a TV milestone not only because it remains one of the most popular sitcoms in television history but also because its characters reflect shifting complexities of gender, age, and economic status for women in the late twentieth century and beyond.

Each chapter is dedicated to exploring what makes these remarkable characters defy expectations of how older women should look, act, and love. Chapter 1 focuses on Dorothy Zbornak's intriguing gender performance and shifting desirability. Chapter 2 digs into Blanche Devereux's difficult relationship with motherhood and aging. Chapter 3 highlights how Rose Nylund made all the "right" choices in life but consistently finds herself disenfranchised by the same social and economic institutions that promised to protect her at midlife. Chapter 4 centers on how Sophia Petrillo drives the action of the show as a trickster-bending plots to her own desires and offering moral lessons to the other characters. The book offers an important analysis of a hugely popular sitcom that extends the boundary of what makes TV groundbreaking and worthy of study.

Browne argues that The Golden Girls is a "classic" sitcom in almost every way, which keeps audiences engaged and allows the show to make subversive moves when it matters most. Written with both superfans and scholars in mind, the book invites new, diverse ways of thinking about the show to spark future scholarship and conversation about four of the most beloved characters in sitcom history.

Kate Browne is a culture writer and essayist. She holds a PhD in English studies from Illinois State University and researches pop culture and body-based autobiography.

If you wish to receive a bookplate to include with your book purchase from Women & Children First (link below), please contact pressmarketing@wayne.edu