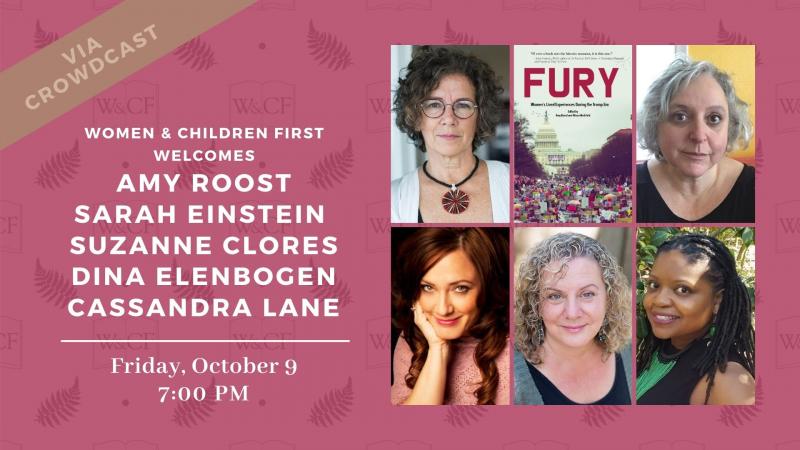 Join us for a virtual author panel featuring contributors to the new anthology, Fury: Women's Lived Experiences During the Trump Era. This event will be hosted on Women & Children First's Crowdcast Channel.

Fury: Women’s Lived Experiences During the Trump Era brings together a diverse community of women who reveal the impact Donald Trump’s behavior, words, and presidency has had on each one of them, how each is confronting the problem, and how she is fighting back.

For this event, we will be joined by:

Sarah Einstein is the author of Mot: A Memoir and Remnants of Passion. Her essays and short stories have appeared in The Sun, Ninth Letter, PANK, and other journals.  She teachs creative wirting at the University of Tennessee in Chatanooga.

Suzanne Clores is a memoirst and podcast producer. She is the author of Memoirs of a Spiritual Outsider, a memoir/ethnography of alternate spiritual practices, and founder of The Extraordinary Project, an online collection of exceptional human experiences gathered over years of research and interviews with individuals and experts in the consciousness field. Her work has appeared in Salon, Elle, and The Nervous Breakdown, among other publications, and has aired on Chicago Public Radio (WBEZ) and the Radiotopia podcast Strangers.

Dina Elenbogen, a widely published and award winning poet and prose writer, is author of the memoir, Drawn from Water: an American Poet, an Ethiopian Family, an Israeli Story  and the poetry collection, Apples of the Earth, She has received fellowships from the Illinois Arts Council and the Ragdale Foundation and her work has appeared in anthologies. She has a poetry MFA from the Iowa Writer’s Workshop and teaches creative writing at the University of Chicago Writer’s Studio. "

Cassandra Lane is Managing Editor of L.A. Parent magazine. She received an MFA in creative writing from Antioch University Los Angeles. Her stories have appeared in a variety of newspapers, magazines, anthologies and storytelling venues, including The Times-Picayune, The Atlanta Journal Constitution, Expressing Motherhood, and the New York Times’ “Conception” series. Her book-length project explores the impact of her great-grandfather's lynching and her “late” entry into motherhood. She recently served on an AWP panel entitled "Writing & Mothering: Black Women Writing Under a Quadruple ‘Minority’ in America.” A Louisiana native, she lives with her family in Los Angeles.