Virtual Author Reading: HOW TO RAISE A FEMINIST SON by Sonora Jha 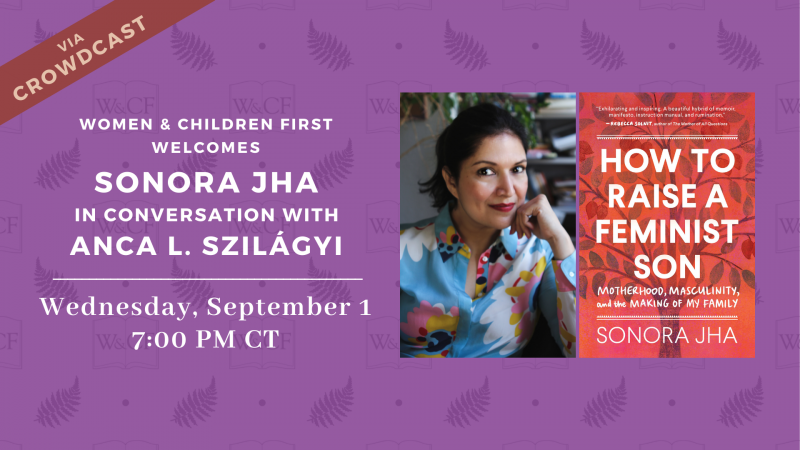 "This book is a true love letter, not only to Jha's own son but also to all of our sons and to the parents--especially mothers--who raise them.”
—Ijeoma Oluo, author of So You Want to Talk About Race and Mediocre

Beautifully written and deeply personal, this book follows the struggles and triumphs of one single, immigrant mother of color to raise an American feminist son. From teaching consent to counteracting problematic messages from the media, well-meaning family, and the culture at large, the author offers an empowering, imperfect feminism, brimming with honest insight and actionable advice.

Informed by Jha's work as a professor of journalism specializing in social justice movements and social media, as well as by conversations with psychologists, experts, other parents and boys--and through powerful stories from her own life--How to Raise a Feminist Son shows us all how to be better feminists and better teachers of the next generation of men in this electrifying tour de force.
Includes chapter takeaways, and an annotated bibliography of reading and watching recommendations for adults and children.

Sonora Jha, PhD, is an essayist, novelist, researcher, and professor of journalism at Seattle University. She is the author of the novel Foreign, and her op-eds and essays have appeared in the New York Times, the Seattle Times, The Establishment, DAME, and in several anthologies. She grew up in Mumbai and has been chief of metropolitan bureau for the Times of India and contributing editor for East magazine in Singapore. She teaches fiction and essay writing for Hugo House, Hedgebrook Writers' Retreat, and Seattle Public Library. She is an alumna and board member of Hedgebrook Writers' Retreat, and has served on the jury for awards for Artist Trust, Hedgebrook, and Hugo House.

Anca L. Szilágyi is the author of the novel Daughters of the Air, which Shelf Awareness called “a striking debut from a writer to watch.” Her writing appears in Los Angeles Review of Books, Electric Literature, and Orion Magazine, among other publications. She is the recipient of awards and fellowships from Lilith Magazine, Vermont Studio Center, Artist Trust, and elsewhere. Originally from Brooklyn, she has lived in Montreal, Seattle, and now Chicago. Her second novel is forthcoming in 2022. Find her at ancawrites.com.

How to Raise a Feminist Son: Motherhood, Masculinity, and the Making of My Family (Hardcover)

Daughters of the Air (Paperback)