Virtual Author Reading: NO JUSTICE IN THE SHADOWS by Alina Das 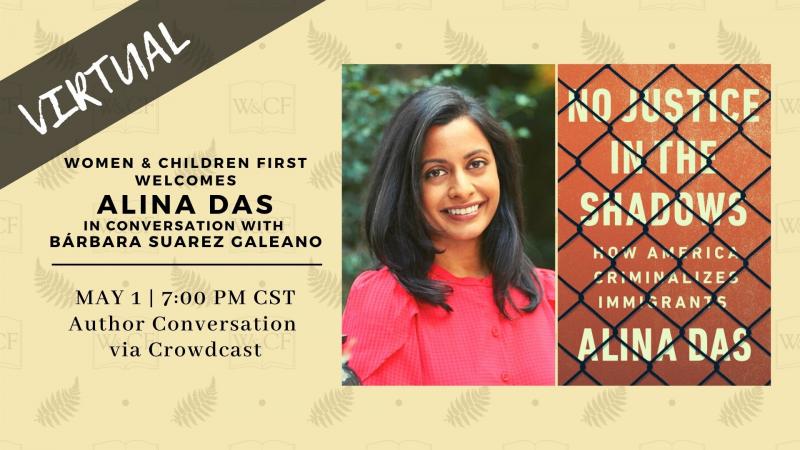 Please join us for a virtual author reading and Q&A celebrating the release of NO JUSTICE IN THE SHADOWS by Alina Das. This event will be streamed through Crowdcast.

For this event, Das will be in conversation with Bárbara Suarez Galeano, Organizing Director, Detention Watch Network.

Each year in the United States, hundreds of thousands of people are arrested, imprisoned, and deported, trapped in what leading immigrant rights activist and lawyer Alina Das calls the "deportation machine." The bulk of the arrests target people who have a criminal record -- so-called "criminal aliens" -- the majority of whose offenses are immigration-, drug-, or traffic-related. These individuals are uprooted and banished from their homes, their families, and their communities.
Through the stories of those caught in the system, Das traces the ugly history of immigration policy to explain how the U.S. constructed the idea of the "criminal alien," effectively dividing immigrants into the categories "good" and "bad," "deserving" and "undeserving." As Das argues, we need to confront the cruelty of the machine so that we can build an inclusive immigration policy premised on human dignity and break the cycle once and for all.
Alina Das is an immigrant rights activist, lawyer, and professor at New York University (NYU) School of Law. Das is the co-director of the NYU Immigrant Rights Clinic, a leading institution in national and local struggles for immigrant rights. She defends the rights of immigrants facing deportation and partners with community groups on immigrant rights campaigns. Her legal scholarship has been published by leading law journals and cited by the U.S. Supreme Court.
Das is the recipient of numerous awards for advocacy and teaching, including the Immigrant Defense Project Champion of Justice Award, the Daniel Levy Memorial Award for Outstanding Achievement in Immigration Law, the New York State Youth Leadership Council Outstanding Attorney Award, the NYU Dr. Martin Luther King Jr. Faculty Award, and the NYU Law School Podell Distinguished Teaching Award. Das is a frequent commentator on immigration law and policy for national and local media outlets. Das lives in Brooklyn, New York.
Bárbara Suarez Galeano, Organizing Director, Detention Watch Network Bárbara supports the organizing team by working alongside local and regional members to develop campaign strategies and community engagement plans to fight against the proliferation of immigration detention. She enjoys working at DWN because of the strength and diversity of its members and the network’s commitment to support and build up the leadership of frontline communities. Prior to joining DWN, Bárbara was deeply involved in a variety of social justice struggles ranging from indigenous sovereignty movements in México to anti-displacement organizing in Chicago. When time allows, Bárbara enjoys visiting her family in Miami, otherwise she can be found lounging around her apartment watching horror films with her feline roommates, Nina and Scrappy.
Event date:
Friday, May 1, 2020 - 7:00pm
Event address:
Women & Children First
5233 N. Clark Street
Chicago, IL 60640

No Justice in the Shadows: How America Criminalizes Immigrants (Hardcover)