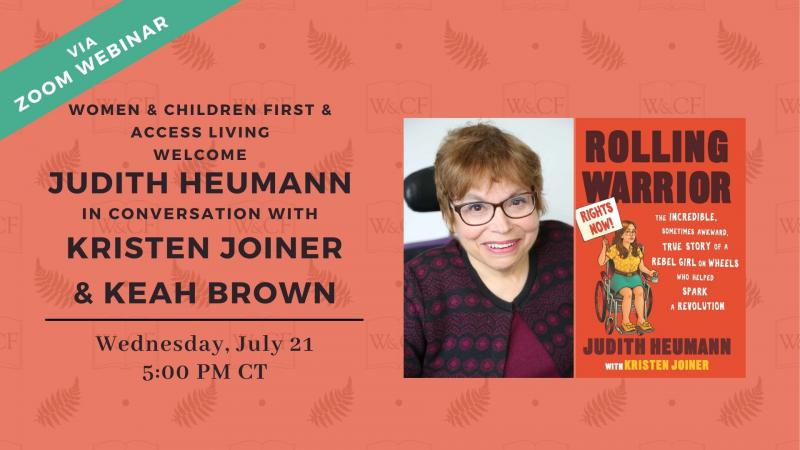 Join us for a virtual event celebrating Rolling Warrior: The Incredible, Sometimes Awkward, True Story of a Rebel Girl on Wheels Who Helped Spark a Revolution by Judith Heumann with Kristen Joiner along with Keah Brown! Thank you to Access Living for co-hosting this event!

This event will be held on Zoom Webinar. ASL interpretation and live captioning will be provided. This event will be recorded and viewable on Women & Children First's YouTube Channel within 24 hours of the live conversation.

Judy Heumann was only 5 years old when she was first denied her right to attend school. Paralyzed from polio and raised by her Holocaust-surviving parents in New York City, Judy had a drive for equality that was instilled early in life.

In this young readers’ edition of her acclaimed memoir, Being Heumann, Judy shares her journey of battling for equal access in an unequal world—from fighting to attend grade school after being described as a “fire hazard” because of her wheelchair, to suing the New York City school system for denying her a teacher’s license because of her disability. Judy went on to lead 150 disabled people in the longest sit-in protest in US history at the San Francisco Federal Building. Cut off from the outside world, the group slept on office floors, faced down bomb threats, and risked their lives to win the world’s attention and the first civil rights legislation for disabled people.

Judy’s bravery, persistence, and signature rebellious streak will speak to every person fighting to belong and fighting for social justice.

Judith Heumann is an internationally recognized leader in the Disability Rights Independent Living Movement. She has served in the Clinton and Obama administrations, and she was the World Bank's first adviser on disability and development. Heumann is the author of a memoir, Being Heumann, and her story was featured in the Netflix documentary Crip Camp: A Disability Revolution (2020). Connect with her on Twitter (@judithheumann) and Facebook (TheHeumannPerspective).

Kristen Joiner is a writer and activist who tries to tell stories that change how people see the world. Her writing on exclusion, inequality, and social change has been published in Stanford Social Innovation Review, Stuff and other outlets. She lives in New Zealand with her family.

Keah Brown is a journalist, author, and screenwriter. She is the creator of #DisabledAndCute. Keah has a B.A. in journalism from The State University of New York at Fredonia. Her work has appeared in Teen Vogue, Elle, Harper’s Bazaar, Marie Claire UK, And The New York Times, among other publications.

Image Description: An orange banner with a leaf pattern background featuring a photo of Judy Heumann, a white disabled woman who uses a motorized wheelchair in front of a white background. Judy is wearing a black cardigan with a maroon pattern layered over a sold maroon shirt. She has short brown hair and is wearing glasses and lipstick. Beside this image is a the cover image of Rolling Warrior, an orange book with an illustration of Judy in her wheelchair holding a sign that says "Rights Now!".

This program is partially supported by a grant from the Illinois Arts Council Agency.