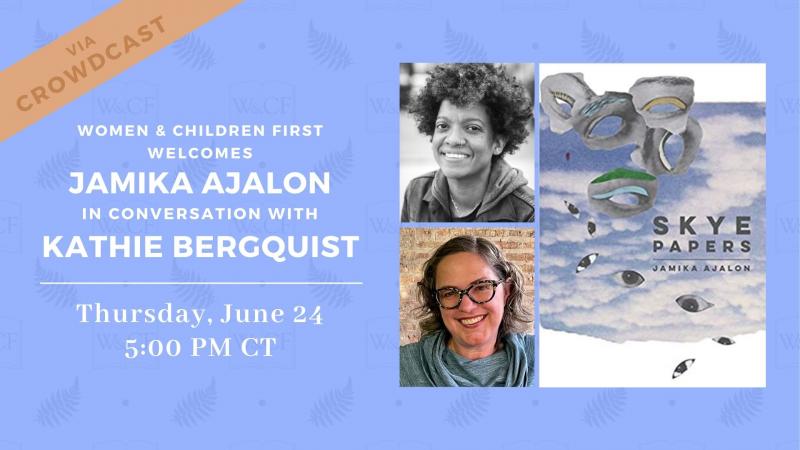 Join us for a virtual conversation on W&CF's Crowdcast Channel in honor of Skye Papers by Jamika Ajalon. For this event, Ajalon will be in conversation with Kathie Berquist.

Twentysomething and restless, Skye flits between cities and stagnant relationships until she meets Scottie, a disarming and disheveled British traveler, and Pieces, an enigmatic artist living in New York. The three recognize each other as kindred spirits--Black, punk, whimsical, revolutionary--and fall in together, leading Skye on an unlikely adventure across the Atlantic. They live a glorious, subterranean existence in 1990s London: making multimedia art, throwing drug-fueled parties, and eking out a living by busking in Tube stations, until their existence is jeopardized by the rise of CCTV and policing.

In fluid and unrelenting prose, Jamika Ajalon's debut novel explores youth, poetry, and what it means to come terms with queerness. Skye Papers is an imaginative, episodic group portrait of a transatlantic art scene spearheaded by people of color--and of the fraught, dystopian reality of increasing state surveillance.

Jamika Ajalon is a prolific author and interdisciplinary artist who works with different mediums independently, but also in multiple fusions—incorporating written and spoken text, sound/music, and visuals. Her poems, stories, and essays have been published in various publications internationally. She currently writes a regular column for Itchy Silk magazine, “queer plume: the fugitive diaries.” She has performed her audiovisual anti-lectures / sonic slam and exhibited across the globe, and has a BA in Film/Video and an MA in Communications in Culture and Society, from Goldsmiths University.
Kathie Bergquist teaches English and Creative Writing at Columbia College Chicago where, when there is not a pandemic, she runs study abroad programs in Paris and Prague. She's editor of the anthology, Windy City Queer, co-author (with Robert McDonald) of The Field Guide to Gay and Lesbian Chicago and has written four books about pop stars, for teenagers. Her solo show, "Beautiful, Radiant Things" was performed at the 2016 Prague Fringe Festival. She's been revising a novel for, like, forever.
Event date:
Thursday, June 24, 2021 - 5:00pm
Event address:
Virtual via Crowdcast