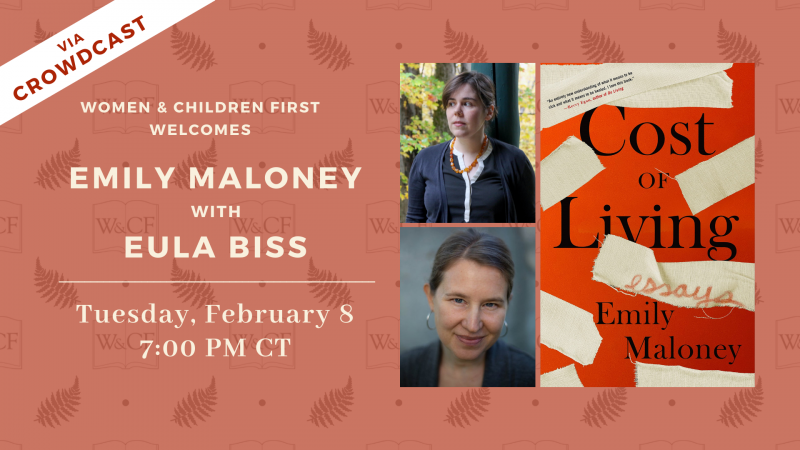 Join us for the virtual release of Cost of LIving: Essays by Emily Maloney. For this event, Maloney will be joined by Eula Biss.

REGISTER FOR THIS EVENT!

The searing intimacy of Girl, Interrupted combined with the uncomfortable truths of The Empathy Exams in a collection of essays chronicling one woman’s experiences as both patient and caregiver, giving a unique perspective from both sides of the hospital bed.

What does it cost to live?

When we fall ill, our lives are itemized on a spreadsheet. A thousand dollars for a broken leg, a few hundred for a nasty cut while cooking dinner. Then there are the greater costs for even greater misfortunes. The car accidents, breast cancers, blood diseases, and dark depressions.

When Emily Maloney was nineteen she tried to kill herself. An act that would not only cost a great deal personally, but also financially, sending her down a dark spiral of misdiagnoses, years spent in and out of hospitals and doctor’s offices, and tens of thousands owed in medical debt. To work to pay off this crippling burden, Emily becomes an emergency room technician. Doing the grunt work in a hospital, and taking care of patients at their most vulnerable moments, chronicling these interactions in searingly beautiful, surprising ways.

Shocking and often slyly humorous, Cost of Living is a brilliant examination of just what exactly our troubled healthcare system asks us to pay, as well as a look at what goes on behind the scenes at our hospitals and in the minds of caregivers.

Emily Maloney’s work has appeared in Glamour, Virginia Quarterly Review, Best American Essays, and the American Journal of Nursing, among others. She has worked as a dog groomer, pastry chef, general contractor, tile setter, and catalog model and has sold her ceramics at art fairs. Maloney has twice been awarded a MacDowell Fellowship. She lives in Evanston, Illinois.

Eula Biss is the author of four books, most recently Having and Being Had. Her book On Immunity was named one of the Ten Best Books of 2014 by the New York Times Book Review, and Notes from No Man’s Land won the National Book Critics Circle award for criticism in 2009. Her work has recently appeared in the Guardian, the Paris Review, Freeman’s, The Believer, and The New Yorker.