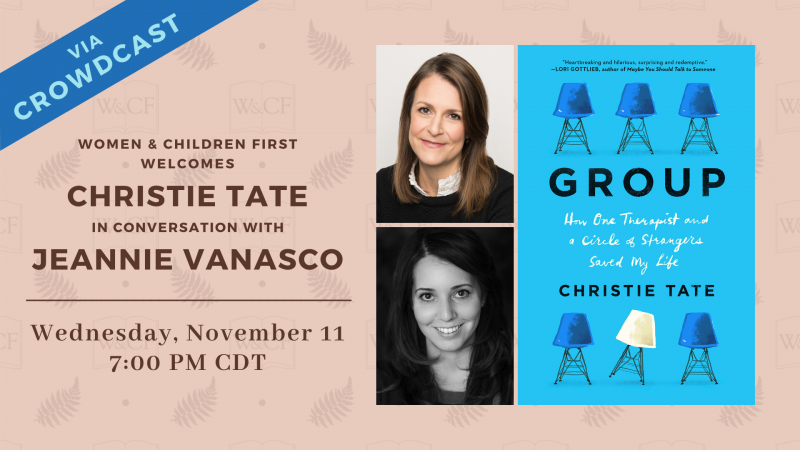 Join us for a virtual launch party in honor of The Group: How One Therapist and a Circle of Strangers Saved My Life. by Christie Tate. For this event, Christie will be in conversation with Jeannie Vanasco! This event will be streamed on Women & Children FIrst's Crowdcast Channel.

The refreshingly original debut memoir of a guarded, over-achieving, self-lacerating young lawyer who reluctantly agrees to get psychologically and emotionally naked in a room of six complete strangers—her psychotherapy group—and in turn finds human connection, and herself.

Christie Tate had just been named the top student in her law school class and finally had her eating disorder under control. Why then was she driving through Chicago fantasizing about her own death? Why was she envisioning putting an end to the isolation and sadness that still plagued her in spite of her achievements?

Enter Dr. Rosen, a therapist who calmly assures her that if she joins one of his psychotherapy groups, he can transform her life. All she has to do is show up and be honest. About everything—her eating habits, childhood, sexual history, etc. Christie is skeptical, insisting that that she is defective, beyond cure. But Dr. Rosen issues a nine-word prescription that will change everything: “You don’t need a cure, you need a witness.”

So begins her entry into the strange, terrifying, and ultimately life-changing world of group therapy. Christie is initially put off by Dr. Rosen’s outlandish directives, but as her defenses break down and she comes to trust Dr. Rosen and to depend on the sessions and the prescribed nightly phone calls with various group members, she begins to understand what it means to connect.

Group is a deliciously addictive read, and with Christie as our guide—skeptical of her own capacity for connection and intimacy, but hopeful in spite of herself—we are given a front row seat to the daring, exhilarating, painful, and hilarious journey that is group therapy—an under-explored process that breaks you down, and then reassembles you so that all the pieces finally fit.

Christie Tate is a Chicago-based writer and essayist. She has been published in The New York Times (Modern Love), The Washington Post, Chicago Tribune, McSweeney’s Internet Tendency elsewhere.

Jeannie Vanasco is the author of Things We Didn't Talk About When I Was a Girl (2019) and The Glass Eye (2017). Both memoirs are published in the US by Tin House Books

Group: How One Therapist and a Circle of Strangers Saved My Life (Hardcover)