Virtual Book Launch: HAVING AND BEING HAD by Eula Biss 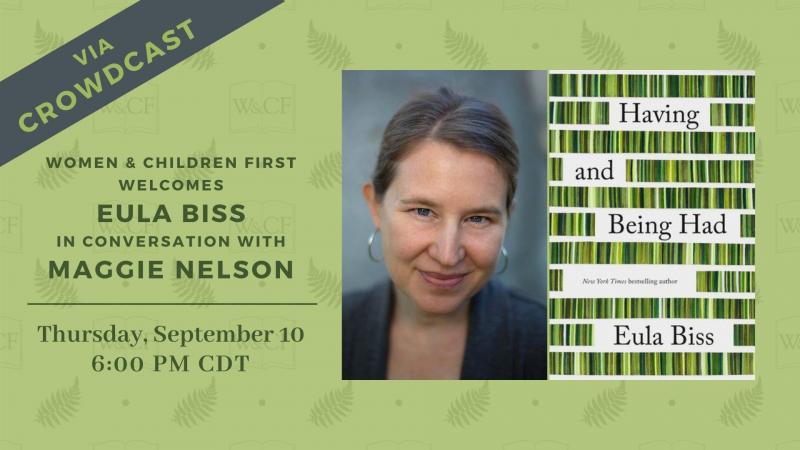 Join us for the virtual celebration of Having and Being Had by Eula Biss. For this event, Eula will be in conversation with Maggie Nelson. This event will be streamed on Women & Children First's Crowdcast Channel.

“My adult life can be divided into two distinct parts,” Eula Biss writes, “the time before I owned a washing machine and the time after.” Having just purchased her first home, she now embarks on a roguish and risky self-audit of the value system she has bought into. The result is a radical interrogation of work, leisure, and capitalism. Described by The New York Times as a writer who “advances from all sides, like a chess player,” Biss brings her approach to the lived experience of capitalism. Playfully ranging from IKEA to Beyoncé to Pokemon, across bars and laundromats and universities, she asks, of both herself and her class, “In what have we invested?”

Maggie Nelson is the author of nine books of poetry and prose, including the National Book Critics Circle Award winner The Argonauts, The Art of Cruelty: A Reckoning, Bluets, The Red Parts, and Jane: A Murder. She has been the recipient of a Guggenheim Fellowship in Nonfiction, an NEA Fellowship in Poetry, an Innovative Literature Fellowship from Creative Capital, and an Arts Writers Fellowship from the Andy Warhol Foundation. In 2016, she was awarded a MacArthur “Genius” Fellowship. She lives in Los Angeles.

Eula Biss is the author of four books, including The New York Times bestseller On Immunity: An Inoculation, which was named one of the 10 Best Books of 2014 by The New York Times Book Review, and Notes from No Man’s Land: American Essays, which won the National Book Critics Circle Award for criticism. Her work has appeared in Harper’s, The New York Times, The Believer, and elsewhere, and has been supported by an NEA Literature Fellowship, a Howard Foundation Fellowship, and a Guggenheim Fellowship.

Having and Being Had (Hardcover)