Virtual Book Launch: HOW TO PACK FOR THE END OF THE WORLD by Michelle Falkoff 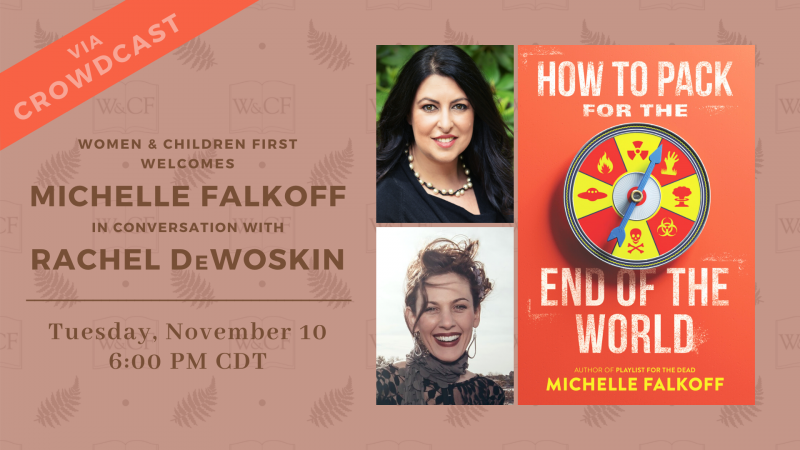 Join us for the virtual launch of HOW TO PACK FOR THE END OF TH WORLD by Michelle Falkoff. For this event, Falkoff will be in conversation with Rachel DeWoskin. This event will be streamed on Women & Children First's Crowdcast Channel.

If you knew the world was going to end tomorrow, what would you do?

This is the question that haunts Amina as she watches new and horrible stories of discord and crisis flash across the news every day.

But when she starts at prestigious Gardner Academy, Amina finds a group of like-minded peers to join forces with—fast friends who dedicate their year to learning survival skills from each other, before it’s too late.

Still, as their prepper knowledge multiplies, so do their regular high school problems, from relationship drama to family issues to friend blow-ups. Juggling the two parts of their lives forces Amina to ask another vital question: Is it worth living in the hypothetical future if it’s at the expense of your actual present?

Michelle Falkoff is the author of Playlist for the Dead (an NPR Great Reads of 2015), Pushing Perfect (2016), Questions I Want to Ask You (2018), and How to Pack for the End of the World (2020). Her fiction and reviews have been published in ZYZZYVA, The Harvard Review, Salon.com, and elsewhere. She is a graduate of the Iowa Writers' Workshpop and serves as director of communication and legal reasoning at Northwestern Pritzker School of Law.

Rachel DeWoskin is the award-winning author of five novels: Someday We Will Fly Banshee, Blind, Big Girl Small,  and Repeat After Me. She has received a National Jewish Book Award, a Sydney Taylor Book Award, and an American Library Association's Alex Award, among others. Two of her books, Foreign Babes in Beijing and Banshee, are being developed in Hollywood for TV. DeWoskin's poetry collection, Two Menus, was published by the University of Chicago Press' Phoenix Poetry Series in 2020. DeWoskin is an Associate Professor of Practice in the Arts at UChicago and an affiliated faculty member in Jewish and East Asian Studies.
Event date:
Tuesday, November 10, 2020 - 6:00pm
Event address:
Virtually via Crowdcast

How to Pack for the End of the World (Hardcover)