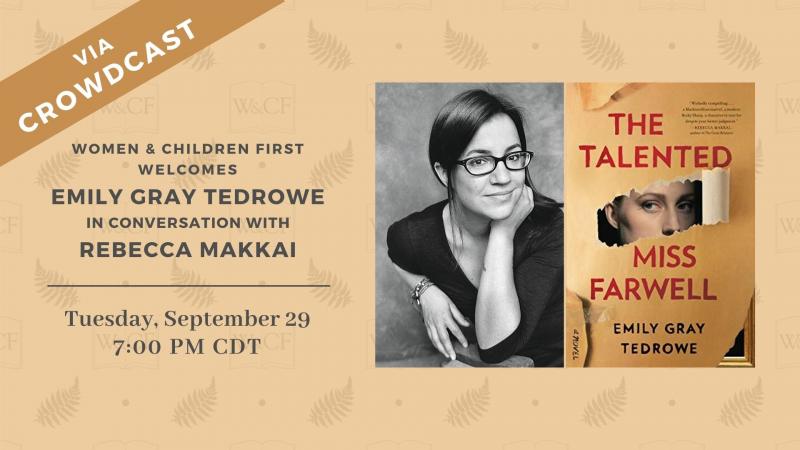 Join us for the virtual launch party for The Talented Miss Farwell by Emily Gray Tedrowe. For this event, Emily will be in conversation with Rebecca Makkai. This event will be streamed on Women & Children First's Crowdcast channel.

Register on EVENTBRITE FOR THIS EVENT for notifications and instructions or join us directly on Crowdcast!

At the end of the 1990s, with the art market finally recovered from its disastrous collapse, Miss Rebecca Farwell has made a killing at Christie’s in New York City, selling a portion of her extraordinary art collection for a rumored 900 percent profit. Dressed in couture YSL, drinking the finest champagne at trendy Balthazar, Reba, as she’s known, is the picture of a wealthy art collector. To some, the elusive Miss Farwell is a shark with outstanding business acumen. To others, she’s a heartless capitalist whose only interest in art is how much she can make.

But a thousand miles from the Big Apple, in the small town of Pierson, Illinois, Miss Farwell is someone else entirely—a quiet single woman known as Becky who still lives in her family’s farmhouse, wears sensible shoes, and works tirelessly as the town’s treasurer and controller.

No one understands the ins and outs of Pierson’s accounts better than Becky; she’s the last one in the office every night, crunching the numbers. Somehow, her neighbors marvel, she always finds a way to get the struggling town just a little more money. What Pierson doesn’t see—and can never discover—is that much of that money is shifted into a separate account that she controls, “borrowed” funds used to finance her art habit. Though she quietly repays Pierson when she can, the business of art is cutthroat and unpredictable.

But as Reba Farwell’s deals get bigger and bigger, Becky Farwell’s debt to Pierson spirals out of control. How long can the talented Miss Farwell continue to pull off her double life?

Rebecca Makkai is the Chicago-based author of the novels The Great Believers, The Hundred-Year House, and The Borrower, as well as the short story collection Music for Wartime. The Great Believers was a finalist for the Pulitzer Prize and the National Book Award, and received the ALA Carnegie Medal and the LA Times Book Prize, among other honors. Makkai is on the MFA faculties of Sierra Nevada College and Northwestern University, and she is Artistic Director of StoryStudio Chicago.

Emily Gray Tedrowe is the Chicago-based author of the novels The Talented Miss Farwell, Blue Stars, and Commuters. She earned a PhD in English literature from New York University, and a BA from Princeton University. She has received an Illinois Arts Council award as well as fellowships from the Ragdale Foundation, Virginia Center for the Creative Arts, and the Sewanee Writers Conference. A frequent book reviewer for USA Today as well as other publications, Tedrowe also writes essays, interviews, and short stories.