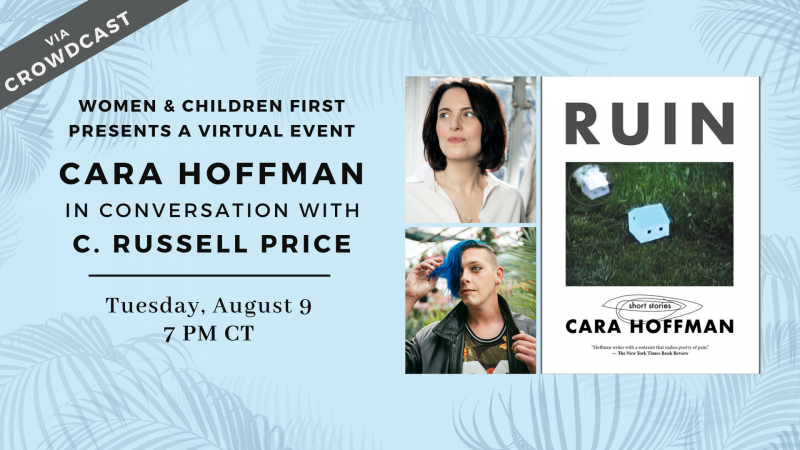 Join us for a virtual conversation on Women & Children First's Crowdcast Channel celebrating the release of RUIN by Cara Hoffman. For this event, Hoffman will be in conversation with C. Russell Price.

A little girl who disguises herself as an old man, an addict who collects dollhouse furniture, a crime reporter confronted by a talkingdog, a painter trying to prove the non-existence of god, and lovers in a penal colony who communicate through technical drawings--these are just a few of the characters who live among the ruins.

RUIN is both bracingly timely and eerily timeless in its examination of an American state in free-fall, unsparing in its disregard for broken institutions, while shining with compassion for all who are left in their wake. Cara Hoffman's short fictions are brutal, surreal, hilarious, and transgressive, celebrating the sharp beauty of outsiders and the infinitely creative ways humans muster psychic resistance under oppressive conditions. The ultimate effect of these ten interconnected stories is one of invigoration and a sense of possibilities--hope for a new world extracted from the rubble of the old.

Cara Hoffman is the author of three New York Times Editors’ Choice novels; the most recent, Running, was named a Best Book of the Year by Esquire Magazine. She first received national attention in 2011 with the publication of So Much Pretty which sparked a national dialogue on violence and retribution, and was named a Best Novel of the Year by the New York Times Book Review. Her second novel, Be Safe I Love You was nominated for a Folio Prize, named one of the Five Best Modern War Novels, and awarded a Sundance Global Filmmaking Award. A MacDowell Fellow and an Edward Albee Fellow, she has lectured at Oxford University’s Rhodes Global Scholars Symposium and at the Renewing the Anarchist Tradition Conference. Her work has appeared in the New York Times, Paris Review, BOMB, Bookforum, Rolling Stone, Daily Beast, and on NPR. A founding editor of the Anarchist Review of Books, and part of the Athens Workshop collective, she lives in Athens, Greece with her partner.
C. Russell Price is a genderqueer Appalachian punk writer originally from Virginia but now lives in Chicago. They are a Lambda Fellow in Poetry, Ragdale Fellow, Windy City Times 30 Under 30 honoree, essayist, and poet. Their chapbook Tonight, We Fuck the Trailer Park Out of Each Other was released by Sibling Rivalry Press. Their full-length poetry collection oh, you thought this was a date?!: APOCALYPSE POEMS explores sexual assault survivorship and queer liberation. They are currently at work on a collection of essays, Everyone’s Doing It; They Just Aren’t Telling You.
Event date:
Tuesday, August 9, 2022 - 7:00pm
Event address:
Virtual via Crowdcast