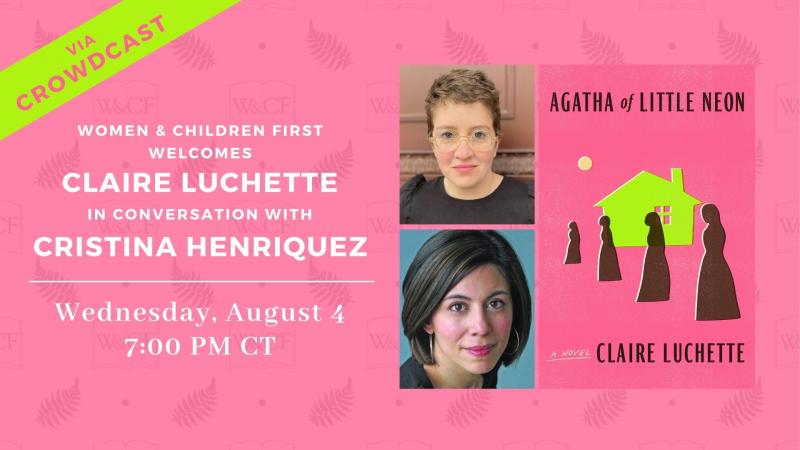 Join us for a virtual event celebrating Agatha of Little Neon by Claire Luchette. For this event, Luchette will be in conversation with Cristina Henriquez.

"Blazingly original, wry, and perfectly attuned to the oddness—and the profundity—of life” (Cristina Henríquez), Claire Luchette's debut, Agatha of Little Neon, is a novel about yearning and sisterhood, figuring out how you fit in (or don’t), and the unexpected friends who help you find your truest self

Agatha has lived every day of the last nine years with her sisters: they work together, laugh together, pray together. Their world is contained within the little house they share. The four of them are devoted to Mother Roberta and to their quiet, purposeful life.

But when the parish goes broke, the sisters are forced to move. They land in Woonsocket, a former mill town now dotted with wind turbines. They take over the care of a halfway house, where they live alongside their charges, such as the jawless Tim Gary and the headstrong Lawnmower Jill. Agatha is forced to venture out into the world alone to teach math at a local all-girls high school, where for the first time in years she has to reckon all on her own with what she sees and feels. Who will she be if she isn’t with her sisters? These women, the church, have been her home. Or has she just been hiding?

Disarming, delightfully deadpan, and full of searching, Claire Luchette’s Agatha of Little Neon offers a view into the lives of women and the choices they make. It is a novel about sisterhood, friendship, and devotion, about figuring out how we fit in (or don’t), and about the unexpected friends who help us find our truest selves.

Claire Luchette has published work in the Virginia Quarterly Review, the Kenyon Review, Ploughshares, and Granta. A 2020 National Endowment for the Arts Fellow, Luchette graduated from the University of Oregon MFA program and has received grants and scholarships from MacDowell, Yaddo, the Millay Colony for the Arts, Lighthouse Works, the Elizabeth George Foundation, and the James Merrill House. Agatha of Little Neon is Luchette’s first novel.

Cristina Henríquez is the author of The Book of Unknown Americans, which was a New York Times Notable Book of 2014 and one of Amazon’s 10 Best Books of the Year. It was the Daily Beast Novel of the Year, a Washington Post Notable Book, an NPR Great Read, a Target Book of the Month selection, and was chosen one of the best books of the year by BookPage, Oprah.com, and School Library Journal. It was also longlisted for the Andrew Carnegie Medal for Excellence in Fiction and was a finalist for the Dayton Literary Peace Prize. Henriquez is also the author The World In Half (a novel), and Come Together, Fall Apart: A Novella and Stories, which was a New York Times Editors’ Choice selection. Her stories have been published in The New Yorker, The Atlantic, Glimmer Train, Ploughshares among other journals and anthologies. Cristina’s nonfiction has appeared in The New Yorker, The New York Times Magazine, The Wall Street Journal, and others. She was featured in Virginia Quarterly Review as one of “Fiction’s New Luminaries,” has been a guest on National Public Radio, and is a recipient of the Alfredo Cisneros Del Moral Foundation Award, a grant started by Sandra Cisneros in honor of her father. Cristina earned her undergraduate degree from Northwestern University and is a graduate of the Iowa Writers’ Workshop. She lives in Illinois.