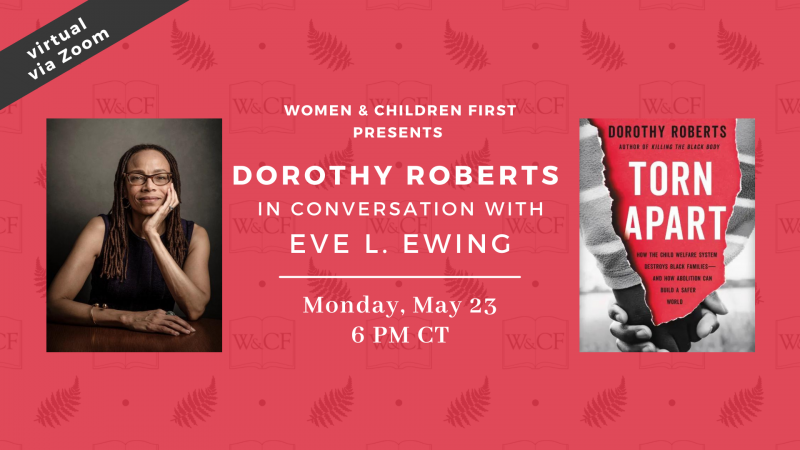 *IMPORTANT UPDATE* Due to a change in the author's schedule, this event will now be held virtually.

Join us for a reading and conversation in honor of Torn Apart: How the Child Welfare System Destroys Black Families--and How Abolition Can Build a Safer World by Dorothy Roberts. For this event, Roberts will be in conversation with Eve L. Ewing. This event will be held via Zoom Webinar.

Many believe the child welfare system protects children from abuse. But as Torn Apart uncovers, this system is designed to punish Black families. Drawing on decades of research, legal scholar and sociologist Dorothy Roberts reveals that the child welfare system is better understood as a “family policing system” that collaborates with law enforcement and prisons to oppress Black communities. Child protection investigations ensnare a majority of Black children, putting their families under intense state surveillance and regulation. Black children are disproportionately likely to be torn from their families and placed in foster care, driving many to juvenile detention and imprisonment.

The only way to stop the destruction caused by family policing, Torn Apart argues, is to abolish the child welfare system and liberate Black communities.

Dorothy Roberts is the George A. Weiss University Professor of Law and Sociology at the University of Pennsylvania.A contributor to the 1619 Project and author of four books, including Killing the Black Body, she lives in Philadelphia

Eve L. Ewing is the award-winning author of the poetry collections Electric Arches and 1919, the nonfiction work Ghosts in the Schoolyard: Racism and School Closings on Chicago's South Side, and the novel for young readers Maya and the Robot as well as several projects for Marvel Comics, most notably the Ironheart series. She is the co-author (with Nate Marshall) of the play No Blue Memories: The Life of Gwendolyn Brooks.