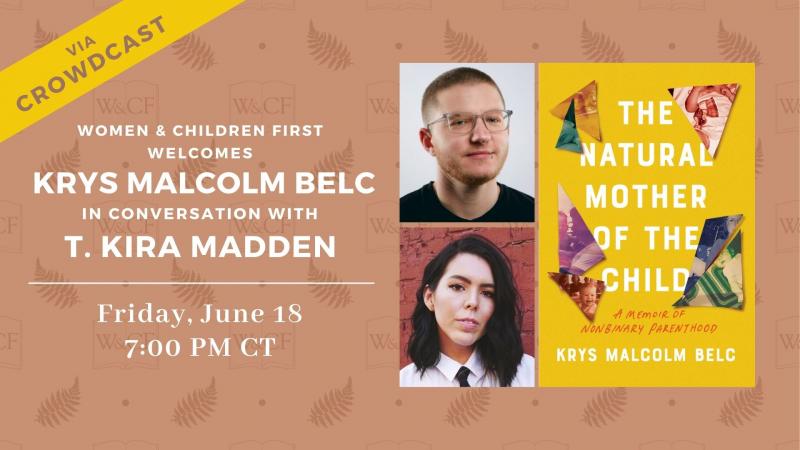 Join us for a virtual conversation on W&CF's Crowdcast Channel in honor of The Natural Mother of the Child by Krys Malcolm Belc. For this event, Belc will be in conversation with T Kira Mahealani Madden.

Krys Malcolm Belc has thought a lot about the interplay between parenthood and gender. As a nonbinary, transmasculine parent, giving birth to his son Samson clarified his gender identity. And yet, when his partner, Anna, adopted Samson, the legal documents listed Belc as “the natural mother of the child.”

By considering how the experiences contained under the umbrella of “motherhood” don’t fully align with Belc’s own experience, The Natural Mother of the Child journeys both toward and through common perceptions of what it means to have a body and how that body can influence the perception of a family. With this visual memoir in essays, Belc has created a new kind of life record, one that engages directly with the documentation often thought to constitute a record of one’s life—childhood photos, birth certificates—and addresses his deep ambivalence about the “before” and “after” so prevalent in trans stories, which feels apart from his own experience.

The Natural Mother of the Child is the story of a person moving past societal expectations to take control of his own narrative, with prose that delights in the intimate dailiness of family life and explores how much we can ever really know when we enter into parenting.

Krys Malcolm Belc's work has appeared in Granta, Black Warrior Review, The Rumpus, and elsewhere, and has been supported by the Sustainable Arts Foundation. Belc lives in Philadelphia with his partner and their three young children.

T Kira Mahealani Madden is a queer AAPI writer, photographer, and amateur magician. A recipient of fellowships from the New York Foundation for the Arts, Hedgebrook, Tin House, MacDowell, and Yaddo, she serves as the founding Editor-in-chief of No Tokens, a magazine of literature and art. Her fiction and nonfiction has been featured in Harper’s, New York Magazine, and others, and she is the author of the 2019 New York Times Editors’ Choice memoir, Long Live the Tribe of Fatherless Girls, a finalist for the National Book Critics Circle Award and the LAMBDA Literary Award for Lesbian Memoir. She facilitates writing workshops for homeless and formerly incarcerated individuals, and currently teaches at Sarah Lawrence College.

The Natural Mother of the Child: A Memoir of Nonbinary Parenthood (Hardcover)