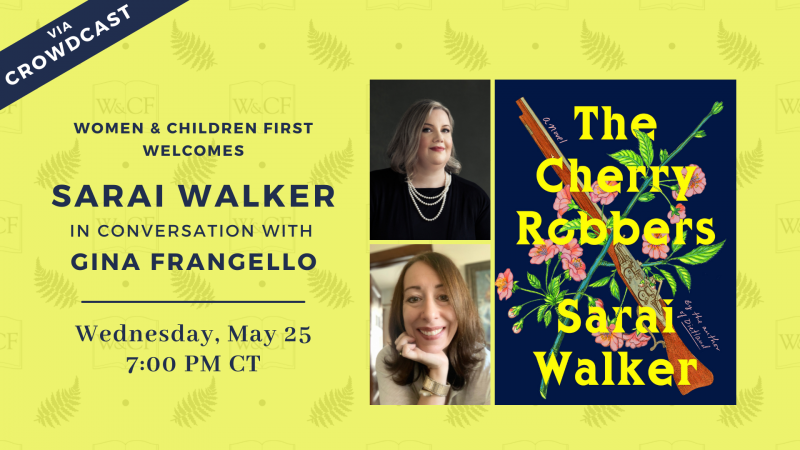 Join us for a virtual conversation on Women & Children First's Crowdcast Channel celebrating the release of The Cherry Robbers by Sarai Walker For this event, Walker will be in conversation with Gina Frangello.

"Sarai Walker has done it again. With The Cherry Robbers she upends the Gothic ghost story with a fiery feminist zeal." —Maria Semple

The highly anticipated second novel from Sarai Walker, following her “slyly subversive” (EW) cult-hit Dietland—a feminist gothic about the lone survivor of a cursed family of sisters, whose time may finally be up.

New Mexico, 2017: Sylvia Wren is one of the most important American artists of the past century. Known as a recluse, she avoids all public appearances. There’s a reason: she’s living under an assumed identity, having outrun a tragic past. But when a hungry journalist starts chasing her story, she’s confronted with whom she once was: Iris Chapel.

Connecticut, 1950: Iris Chapel is the second youngest of six sisters, all heiresses to a firearms fortune. They’ve grown up cloistered in a palatial Victorian house, mostly neglected by their distant father and troubled mother, who believes that their house is haunted by the victims of Chapel weapons. The girls long to escape, and for most of them, the only way out is marriage. But not long after the first Chapel sister walks down the aisle, she dies of mysterious causes, a tragedy that repeats with the second, leaving the rest to navigate the wreckage, to heart-wrenching consequences.

Ultimately, Iris flees the devastation of her family, and so begins the story of Sylvia Wren. But can she outrun the family curse forever?

Sarai Walker is the author of the novel Dietland, which has been published in more than a dozen countries and adapted as a television series for AMC. She has lectured on feminism and body image internationally, and has spoken about these topics widely in the media. Her articles and essays have appeared in The New York Times, The Washington Post, The Guardian and elsewhere, and she worked as a writer and editor on an updated version of Our Bodies, Ourselves. She holds an MFA in creative writing from Bennington College and a PhD in English from the University of London. She lives in Philadelphia.

Gina Frangello is the author of four books of fiction in addition to the memoir, Blow Your House Down: A Story of Family, Feminism, and Treason. Her novel A Life in Men is currently under development by Charlize Theron’s production company, Denver & Delilah. Her most recent novel, Every Kind of Wanting was included on several “best of” lists for 2016, including Chicago Magazine’s and The Chicago Review of Books’. She has nearly 20 years of experience as an editor, having founded both the independent press Other Voices Books and the fiction section of the popular online literary community The Nervous Breakdown. She has also served as the Sunday editor for The Rumpus, and as the faculty editor for both TriQuarterly Online and The Coachella Review. Her short fiction, essays, book reviews and journalism have been published in such venues as Salon, the LA Times, Ploughshares, Psychology Today, and in many other magazines and anthologies. Gina lives mainly in Chicago and occasionally in the California desert with her family and three gluttonous cats.