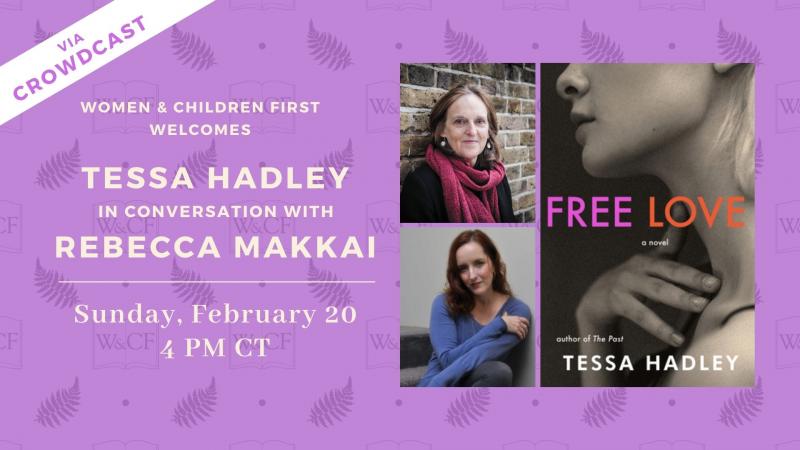 Join us for a virtual conversation on Women & Children First's Crowdcast Channel celebrating the release of Free Love by Tessa Hadley. For this event, Hadley will be in conversation with Rebecca Makkai.

From the bestselling author of Late in the Day and The Past comes a compulsive new novel about one woman’s sexual and intellectual awakening in 1960s London.

1967. While London comes alive with the new youth revolution, the suburban Fischer family seems to belong to an older world of conventional stability: pretty, dutiful homemaker Phyllis is married to Roger, a devoted father with a career in the Foreign Office. Their children are Colette, a bookish teenager, and Hugh, the golden boy.

But when the twenty-something son of an old friend pays the Fischers a visit one hot summer evening, and kisses Phyllis in the dark garden after dinner, something in her catches fire. Newly awake to the world, Phyllis makes a choice that defies all expectations of her as a wife and a mother. Nothing in these ordinary lives is so ordinary after all, it turns out, as the family’s upheaval mirrors the dramatic transformation of the society around them.

With scalpel-sharp insight, Tessa Hadley explores her characters’ inner worlds, laying bare their fears and longings. Daring and sensual, Free Love is an irresistible exploration of romantic love, sexual freedom and living out the truest and most meaningful version of our selves – a novel that showcases Hadley’s unrivaled ability to “put on paper a consciousness so visceral, so fully realized, it heightens and expands your own” (Lily King, author of Euphoria).

Tessa Hadley is the author of seven highly acclaimed novels, including The Past and Late in the Day, as well as three short story collections, most recently Bad Dreams and Other Stories, which won the Edge Hill Short Story Prize. Her stories appear regularly in The New Yorker; in 2016 she was awarded the Windham Campbell Prize and the Hawthornden Prize. She lives in London.

Rebecca Makkai is the Chicago-based author of the novels The Great Believers, The Hundred-Year House, and The Borrower, as well as the short story collection Music for Wartime. The Great Believers was a finalist for the Pulitzer Prize and the National Book Award, and received the ALA Carnegie Medal and the LA Times Book Prize, among other honors. Makkai is on the MFA faculties of Sierra Nevada College and Northwestern University, and she is Artistic Director of StoryStudio Chicago.