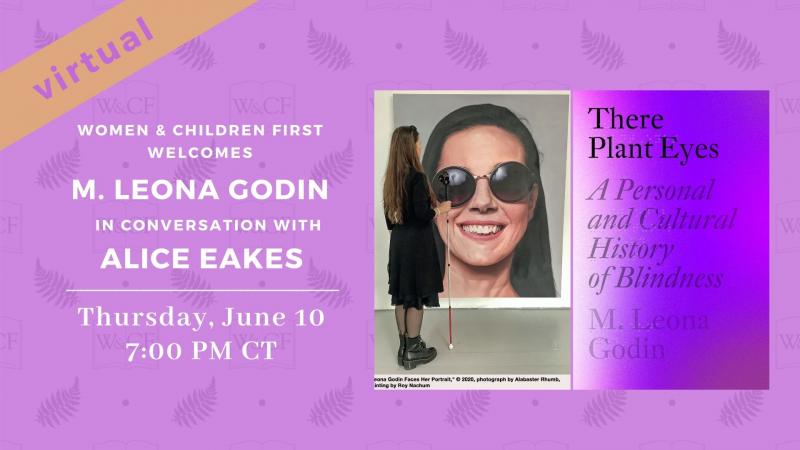 Join us for a virtual event celebrating There Plant Eyes: A Personal and Cultural History of Blindness by M. Leona Godin. For this event, Godin will be in conversation with Alice Eakes.

ASL interpretation and captioning will be provided for this event. This event will be hosted on Zoom Webinar. Attendees will be emailed the access link on the morning of the event.

From Homer to Helen Keller, from Dune to Stevie Wonder, from the invention of braille to the science of echolocation, M. Leona Godin explores the fascinating history of blindness, interweaving it with her own story of gradually losing her sight.

There Plant Eyes probes the ways in which blindness has shaped our ocularcentric culture, challenging deeply ingrained ideas about what it means to be “blind.” For millennia, blind­ness has been used to signify such things as thoughtlessness (“blind faith”), irrationality (“blind rage”), and unconsciousness (“blind evolution”). But at the same time, blind people have been othered as the recipients of special powers as compensation for lost sight (from the poetic gifts of John Milton to the heightened senses of the comic book hero Daredevil).

Godin—who began losing her vision at age ten—illuminates the often-surprising history of both the condition of blindness and the myths and ideas that have grown up around it over the course of generations. She combines an analysis of blindness in art and culture (from King Lear to Star Wars) with a study of the science of blindness and key developments in accessibility (the white cane, embossed printing, digital technology) to paint a vivid personal and cultural history.

A genre-defying work, There Plant Eyes reveals just how essential blindness and vision are to humanity’s understanding of itself and the world.

M. Leona Godin is a writer, performer, and educator who is blind. Her writing has appeared in The New York Times; Playboy; O, The Oprah Magazine; and Catapult, where she writes the column “A Blind Writer’s Notebook.” She was a 2019 Logan Nonfiction Fellow and has written and produced two theatrical productions: The Star of Happiness, based on Helen Keller’s time performing in vaudeville, and The Spectator and the Blind Man, about the invention of braille. She founded the online magazine Aromatica Poetica as a forum for exploring the arts and sciences of smell and taste, not specifically for, but welcoming to, blind readers and writers. She holds a PhD in English Literature from NYU and has lectured on art, accessibility, disability, and technology at NYU’s Tandon School of Engineering, Rice University, and the American Printing House for the Blind, among other venues.

Laurie Alice Eakes has held many jobs, from socialworker, to office manager, to high school English teacher, and all became fodder for her imagination and the day when she could fulfill her dream of being a full-time author.  She took every opportunity offered to write newsletter articles, press releases, and short stories until she sold her first novel. That book won a major award, and the world of publishing opened before her. To date, she has sold thirty-two books in women’s fiction and articles in trade and national publications: nonfiction essays and, recently, her first young adult short story. Eakes doesn’t struggle to write; she struggles with the discrimination she faces in the publishing industry due to her blindness. Despite this, she is, at present, the only totally blind person traditionally published in full-length fiction. When not writing, she loves to travel and has been to several countries and most U.S. states, often on her own. She also loves long walks with her guide dog,  Windy, reading books in most genres, and spending time drinking wine with friends. She lives in the Chicago area with more cats than she wants to admit owning her, and her husband, who pretends he doesn’t like the cats, while cuddling them and talking baby talk to them when he thinks no one is around.

Image Description: Image of the author, M. LEONA GODIN and the cover of her book side by side. The author image is a photograph of the author from behind, standing in front of a painted portrait of herself. She is a white appearing femme person with long dark hair hanging loose down her back, wearing a knee-length black dress and black boots and holding a cane. The portrait she is facing is a close-up of her own face wearing dark sunglasses and smiling widely. The book cover is a gradient of purple, like a bright spotlight is shining on the left hand side of the cover darkening into a deeper purple as it fades to the right. Overlaid on the purple cover is the title and author's name in black typeface: There Plant Eyes: A Personal and Cultural History of Blindness By M. Leona Godin.

There Plant Eyes: A Personal and Cultural History of Blindness (Hardcover)