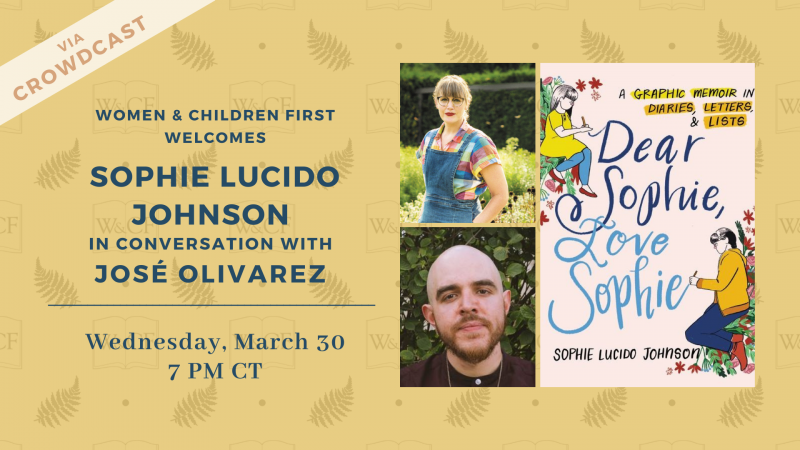 Join us for a virtual conversation on Women & Children First's Crowdcast Channel celebrating the release of Dear Sophie, Love Sophie: A Graphic Memoir in Diaries, Letters, and Lists by Sophie Lucido Johnson. For this event, Johnson will be in conversation with José Olivarez.

Inspired by the journals she kept growing up, Sophie Lucido Johnson began an interactive conversation between her younger self and her current self. When she began the exercise, Sophie envisioned sharing important lessons on what it means to love your body, navigate relationships, and discover what fulfills you, no matter where life takes you. But as these “exchanges” deepened, adult Sophie discovered she had much to learn about life from young Sophie as well.

Sophie Lucido Johnson is a writer, illustrator, comedian, and the editor-in-chief of Neutrons Protons, an online literary magazine. She has been published in The New Yorker, Guernica, The Guardian, VICE, Catapult, DAME, McSweeney's, Jezebel, The Hairpin, The Nation, and ROOKIE, among others. Her first book Many Love published in 2018.

José Olivarez is the son of Mexican immigrants. His debut book of poems, Citizen Illegal, was a finalist for the PEN/ Jean Stein Award and a winner of the 2018 Chicago Review of Books Poetry Prize. It was named a top book of 2018 by The Adroit Journal, NPR, and the New York Public Library. Along with Felicia Chavez and Willie Perdomo, he is co-editor of the anthology, The BreakBeat Poets Vol. 4: LatiNEXT. He is the co-host of the poetry podcast, The Poetry Gods. In 2018, he was awarded the first annual Author and Artist in Justice Award from the Phillips Brooks House Association and named a Debut Poet of 2018 by Poets & Writers. In 2019, he was awarded a Ruth Lilly and Dorothy Sargent Rosenberg Poetry Fellowship from the Poetry Foundation. His work has been featured in The New York Times, The Paris Review, and elsewhere.