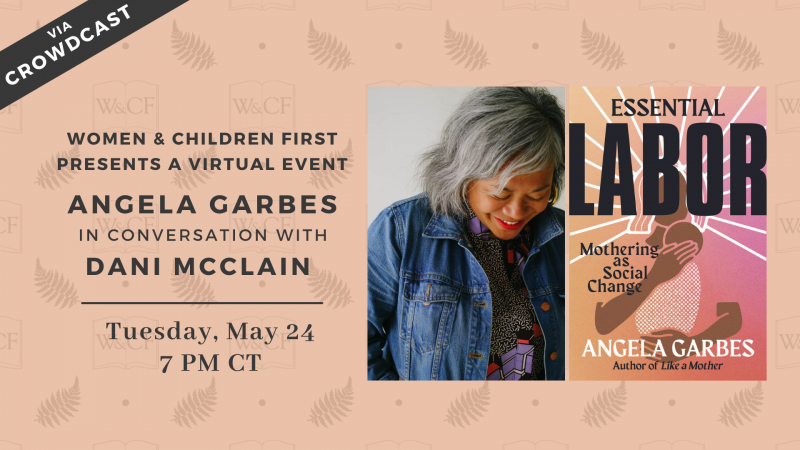 Join us for a virtual conversation on Women & Children First's Crowdcast Channel celebrating the release of Essential Labor by Angela Garbes For this event, Garbes will be in conversation with Dani McClain.

From the acclaimed author of Like a Mother comes a reflection on the state of caregiving in America, and an exploration of mothering as a means of social change.

The Covid-19 pandemic shed fresh light on a long-overlooked truth: mothering is among the only essential work humans do. In response to the increasing weight placed on mothers and caregivers—and the lack of a social safety net to support them—writer Angela Garbes found herself pondering a vital question: How, under our current circumstances that leave us lonely, exhausted, and financially strained, might we demand more from American family life?

In Essential Labor, Garbes explores assumptions about care, work, and deservedness, offering a deeply personal and rigorously reported look at what mothering is, and can be. A first-generation Filipino-American, Garbes shares the perspective of her family's complicated relationship to care work, placing mothering in a global context—the invisible economic engine that has been historically demanded of women of color.

Garbes contends that while the labor of raising children is devalued in America, the act of mothering offers the radical potential to create a more equitable society. In Essential Labor, Garbes reframes the physically and mentally draining work of meeting a child's bodily and emotional needs as opportunities to find meaning, to nurture a deeper sense of self, pleasure, and belonging. This is highly skilled labor, work that impacts society at its most foundational level.

Part galvanizing manifesto, part poignant narrative, Essential Labor is a beautifully rendered reflection on care that reminds us of the irrefutable power and beauty of mothering.

Angela Garbes is the author of Like a Mother, an NPR Best Book of the Year and finalist for the Washington State Book Award in Nonfiction. Her work has appeared in The New York Times, The Cut, New York, Bon Appétit, and featured on NPR's Fresh Air. She lives with her family in Seattle.

Dani McClain reports on race, parenting and reproductive health. McClain's writing has appeared in outlets including The New York Times, TIME, The Atlantic, Colorlines and EBONY.com. Her work has been recognized by the National Lesbian and Gay Journalists Association, the National Association of Black Journalists, and Planned Parenthood Federation of America. In 2018, she received a James Aronson Award for Social Justice Journalism. McClain is a contributing writer at The Nation and a fellow with Type Media Center. She was a staff reporter at the Milwaukee Journal Sentinel and has worked as a strategist with organizations including Color of Change and Drug Policy Alliance. Her book, We Live for the We: The Political Power of Black Motherhood, was published in 2019 by Bold Type Books and was shortlisted in 2020 for a Hurston/Wright Legacy Award. She was the Cincinnati public library's Writer-in-Residence in 2020 and 2021.