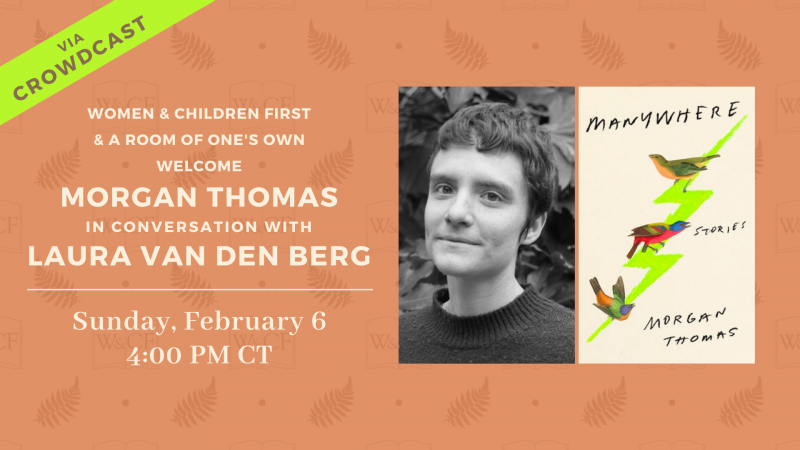 The nine stories in Morgan Thomas’s shimmering debut collection, Manywhere, witness Southern queer and genderqueer characters determined to find themselves reflected in the annals of history, at whatever cost. As each character traces deceit and violence through Southern tall tales and their own pasts, their journeys reveal the porous boundaries of body, land, and history, and the sometimes ruthless awakenings of self-discovery.

A trans woman finds her independence through the purchase of a pregnancy bump. A young Virginian flees their relationship, choosing instead to immerse themselves in the life of an intersex person from Colonial-era Jamestown. A young writer tries to evade the murky and violent legacy of an ancestor who supposedly disappeared into a midwifery bag. And in the uncanny title story, a young trans person brings home a replacement daughter for their elderly father.

Winding between reinvention and remembrance, transition and transcendence, these origin stories rebound across centuries. With warm, meticulous emotional intelligence, Thomas uncovers how the stories we borrow to understand ourselves in turn shape the people we become. Ushering in a new form of queer mythmaking, Manywhere introduces a storyteller of uncommon range and talent.

Morgan Thomas’s work has appeared in The Atlantic, The Kenyon Review, American Short Fiction, VICE, Electric Literature, Ploughshares, them., and StoryQuarterly, where their story won the 2019 Fiction Prize. They are the recipient of a Bread Loaf Work-Study Grant, a Fulbright Grant, the Penny Wilkes Scholarship in Writing and the Environment, and the winner of the inaugural Southern Studies Fellowship in Arts and Letters. They have also received fellowships from the Sewanee Writers’ Conference and the Arctic Circle. A graduate of the University of Oregon MFA program, they live in Portland.
Laura van den Berg is the author of the story collections What the World Will Look Like When All the Water Leaves Us, The Isle of Youth, and I Hold a Wolf by the Ears, which was named one the ten best fiction books of 2020 by TIME, and the novels Find Me and The Third Hotel, which was a finalist for the New York Public Library Young Lions Fiction Award and an Indie Next pick, and was named a best book of 2018 by more than a dozen publications. She is the recipient of a Guggenheim Fellowship, a Strauss Living Award and a Rosenthal Family Foundation Award from the American Academy of Arts and Letters, the Bard Fiction Prize, a PEN/O. Henry Award, and a MacDowell Colony Fellowship, and is a two-time finalist for the Frank O'Connor International Short Story Award. Born and raised in Florida, Laura splits her time between the Boston area and Central Florida, with her husband and dog.