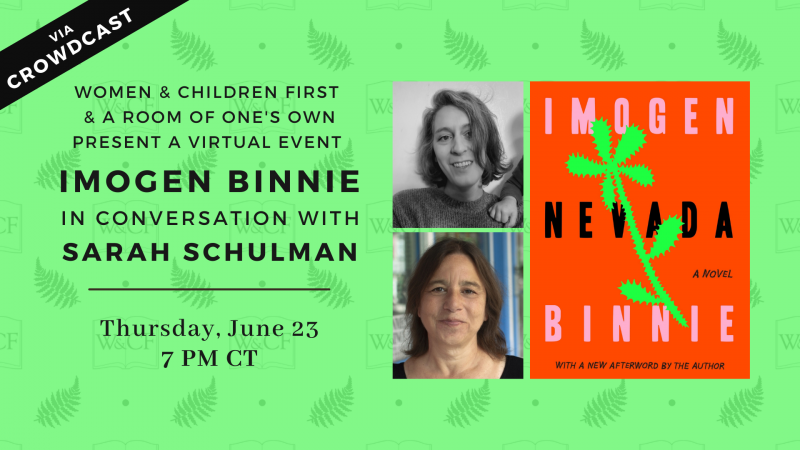 Join us for a virtual conversation co-hosted by Room of One's Own and held on Women & Children First's Crowdcast Channel celebrating the exciting reissue of NEVADA by Imogen Binnie For this event, Binnie will be in conversation with Sarah Schulman.
REGISTER FOR THIS EVENT
A beloved and blistering cult classic and finalist for the Lambda Literary Award for Transgender Fiction finally back in print, Nevada follows a disaffected trans woman as she embarks on a cross-country road trip.

Maria Griffiths is almost thirty and works at a used bookstore in New York City while trying to stay true to her punk values. She’s in love with her bike but not with her girlfriend, Steph. She takes random pills and drinks more than is good for her, but doesn’t inject anything except, when she remembers, estrogen, because she’s trans. Everything is mostly fine until Maria and Steph break up, sending Maria into a tailspin, and then onto a cross-country trek in the car she steals from Steph. She ends up in the backwater town of Star City, Nevada, where she meets James, who is probably but not certainly trans, and who reminds Maria of her younger self. As Maria finds herself in the awkward position of trans role model, she realizes that she could become James’s savior—or his downfall.
Imogen Binnie is the author of the novel Nevada, which won the Betty Berzon Emerging Writer Award and was a finalist for the 2014 Lambda Literary Award for Transgender Fiction. A writer for several television shows and a former columnist for Maximum Rocknroll, she lives in Vermont with her family.
Sarah Schulman is the author of more than twenty works of theater, fiction, and nonfiction, including, most recently, Let the Record Show: A Political History of ACT UP New York, 1987-1993. The producer and screenwriter of several feature films, she is a Distinguished Professor at the College of Staten Island, a fellow at the New York Institute for the Humanities, and the recipient of fellowships from the MacDowell Colony, Yaddo, and the New York Foundation for the Arts, and was presented in 2018 with Publishing Triangle’s Bill Whitehead Award for Lifetime Achievement. She is the cofounder of the MIX New York LGBT Experimental Film and Video Festival, and the codirector of the groundbreaking ACT UP Oral History Project. A lifelong New Yorker, she is a committed activist for queer rights and female empowerment, and serves on the advisory board of Jewish Voice for Peace.
Event date:
Thursday, June 23, 2022 - 7:00pm
Event address:
Virtual via Crowdcast