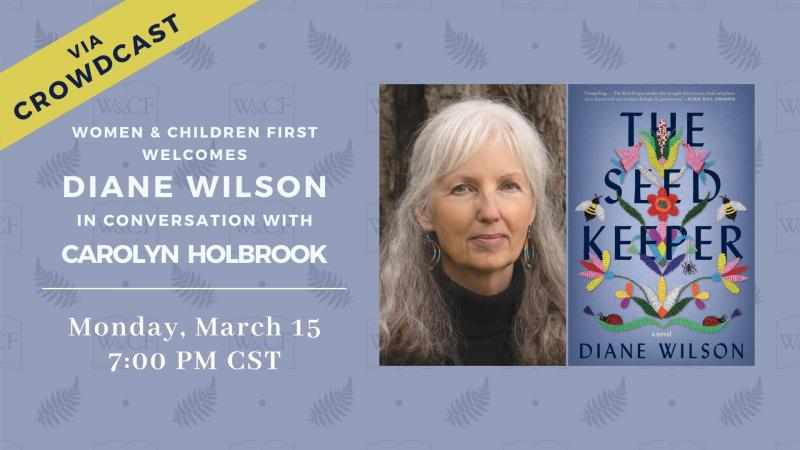 Join us for a virtual author reading and conversation on our Crowdcast channel in celebration of The Seed Keeper by Diane Wilson. For this event, Diane will be in conversation with Carolyn Holbrook.

A haunting novel spanning several generations, The Seed Keeper follows a Dakhóta family's struggle to preserve their way of life, and their sacrifices to protect what matters most.

Rosalie Iron Wing has grown up in the woods with her father, Ray, a former science teacher who tells her stories of plants, of the stars, of the origins of the Dakhóta people. Until, one morning, Ray doesn't return from checking his traps. Told she has no family, Rosalie is sent to live with a foster family in nearby Mankato--where the reserved, bookish teenager meets rebellious Gaby Makespeace, in a friendship that transcends the damaged legacies they've inherited.

On a winter's day many years later, Rosalie returns to her childhood home. A widow and mother, she has spent the previous two decades on her white husband's farm, finding solace in her garden even as the farm is threatened first by drought and then by a predatory chemical company. Now, grieving, Rosalie begins to confront the past, on a search for family, identity, and a community where she can finally belong. In the process, she learns what it means to be descended from women with souls of iron--women who have protected their families, their traditions, and a precious cache of seeds through generations of hardship and loss, through war and the insidious trauma of boarding schools.

Diane Wilson is the author of The Seed Keeper and the memoir, Spirit Car: Journey to a Dakota Past, which won a Minnesota Book Award and was selected for the One Minneapolis One Read program, as well as a nonfiction book, Beloved Child: A Dakota Way of Life, which was awarded the Barbara Sudler Award from History Colorado. Her most recent essay, “Seeds for Seven Generations,” was featured in the anthology A Good Time for the Truth: Race in Minnesota. Wilson has received a Bush Foundation Fellowship as well as awards from the Minnesota State Arts Board, the Jerome Foundation, and the East Central Regional Arts Council. In 2018, she was awarded a 50 Over 50 Award from Pollen/Midwest. Wilson is the executive director for the Native American Food Sovereignty Alliance, a national coalition of tribes and organizations working to create sovereign food systems for Native people. She is a Mdewakanton descendent, enrolled on the Rosebud Reservation, and lives in Shafer, Minnesota.

Carolyn Holbrook is a writer, educator, and longtime advocate for the healing power of the arts. Her essay collection, Tell Me Your Names and I Will Testify is a finalist for a 2021 MN Book Award in the Memoir and Nonfiction category. She is also co-author of MN civil rights icon, Dr. Josie R. Johnson’s memoir, Hope In the Struggle. Her essays have been published widely most recently in A Good Time for the Truth: Race in Minnesota and Blues Vision: African American Writing from Minnesota. She is the recipient of three MN State Arts Board grants and an MRAC Next Step grant. She was awarded a 50 over 50 award from AARP/Pollen Midwest in 2016. Holbrook was the first person of color to win the Minnesota Book Awards Kay Sexton Award. She is founder and artistic/executive director of More Than a Single Story for which she won a MN Women’s Press Changemaker award in 2015, and was founder and director of SASE: The Write Place (1993-2006). She teaches creative writing at the Loft Literary Center and other community venues, and at Hamline University, where she won the Exemplary Teacher award in 2014. https://www.carolynleeholbrook.com/