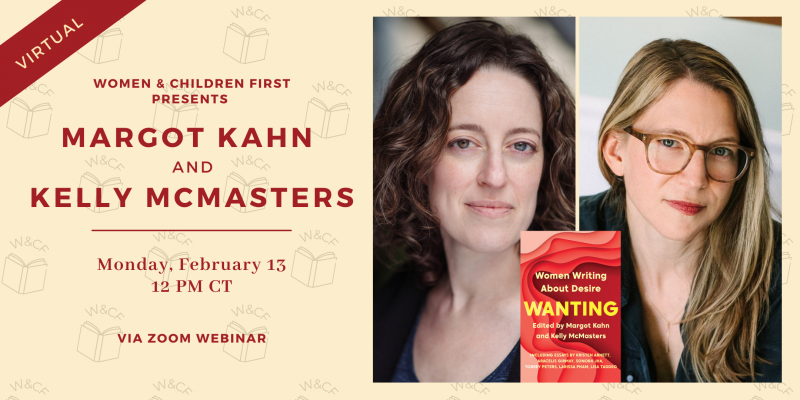 Please join us for a virtual event celebrating the release of Wanting: Women Writing About Desire with Margot Kahn and Kelly McMasters. For this event, Margot and Kelly will be joined by contributors Laura Joyce-Hubbard, Gina Frangello, and Sonora Jha.

REGISTER FOR THIS EVENT HERE!

This is a virtual event that will be hosted on Zoom Webinar.

An intimate and empowering anthology of essays that explore the changing face of female desire in whip-smart, sensuous prose, with pieces by Tara Conklin, Camille Dungy, Melissa Febos, Lisa Taddeo, and others

What is desire? And what are its rules? In this daring collection, award-winning and emerging female writers share their innermost longings, in turn dismantling both personal and political constructs of what desire is or can be.

In the opening essay, Larissa Pham unearths the ache beneath all her wants: time. Rena Priest’s desire for a pair of five-hundred-dollar cowboy boots spurs a reckoning with her childhood on the rez and the fraught history of her hometown. Other pieces in the collection turn cultural tropes around dating, sex, and romance on their heads—Angela Cardinale tries dating as a divorced mother of two in the California suburbs only to discover sweet solace in being alone; Keyanah B. Nurse finds power in polyamory; and when Joanna Rakoff spots a former lover at a bar, the heat between them unravels her family as she is pulled into his orbit—an undoing, she decides, that’s worth everything.

Including pieces by Tara Conklin, Torrey Peters, Camille Dungy, Melissa Febos, Lisa Taddeo, and so many others, these candid and insightful essays tackle the complicated knot of women’s desire.

Margot Kahn is the author of Horses That Buck, the biography of world-champion rodeo cowboy “Cody” Bill Smith, and a collection of poems, A Quiet Day with the West on Fire. She is coeditor, along with Kelly McMasters, of the New York Times Editors’ Choice anthology This Is the Place: Women Writing About Home, and her essays and reviews have appeared in The Rumpus, Lenny Letter, Publishers Weekly, and Bust, among other places. An Ohio native, she lives in the Pacific Northwest with her husband and son.

Kelly McMasters is the author of the forthcoming The Leaving Season: A Memoir and Welcome to Shirley: A Memoir from an Atomic Town, the basis for the documentary film The Atomic States of America. She is coeditor, along with Margot Kahn, of This Is the Place: Women Writing About Home, and her essays and reviews have appeared in The New York Times, The Washington Post Magazine, The Paris Review Daily, The American Scholar, and River Teeth: A Journal of Nonfiction Narrative. McMasters is an essayist, professor, mother, and former bookshop owner living in New York.

Laura Joyce-Hubbard is a Northwestern University MFA candidate and fiction editor for TriQuarterly. Her nonfiction and poetry appear in Creative Nonfiction, the Sewanee Review, the Chicago Tribune, The Rumpus, Boulevard, Ninth Letter, Hippocampus, Tupelo Quarterly, and elsewhere. She has received fellowships from the Ragdale Foundation and the National Endowment for the Arts to attend a residency at VCCA. She won the 2021 Ned Stuckey-French nonfiction contest at Southeast Review and the 2020 Essay Prize in the William Faulkner Pirates’ Alley Writing Competition. Laura was a pilot in the U.S. Air Force and commercial airlines and still waves hello/goodbye to her spouse each week from their home near Chicago.
Sonora Jha is the author of the novel Foreign (Penguin Random House India, 2013) and the memoir How to Raise a Feminist Son: Motherhood, Masculinity, and the Making of My Family (Sasquatch Books U.S.A. and Penguin Random House India, 2021). After a career as a journalist covering crime, politics, and culture in India and Singapore, she moved to the United States to earn a PhD in media and public affairs. Sonora’s OpEds, essays, and public appearances have featured in the New York Times, BBC, DAME Magazine, Electric Literature, and elsewhere. Her new novel, The Laughter, is forthcoming from Harper Via in early 2023. She is a professor of journalism and lives in Seattle.
Gina Frangello is the author of Blow Your House Down, Every Kind of Wanting, A Life in Men, Slut Lullabies, and My Sister's Continent. Her short fiction, essays, book reviews, and journalism have been published in Ploughshares, The Boston Globe, Chicago Tribune, HuffPost, Fence, Five Chapters, Prairie Schooner, Chicago Reader, and many other publications. She lives with her family in the Chicago area.

Accessibility: Email wcfbooks@gmail.com with questions or to request accommodations.

**All of our virtual events are recorded. The recordings are later uploaded with closed captioning to our YouTube Channel within a week or two of the event. **