Virtual Event: WHO IS WELLNESS FOR?: An Examination of Wellness Culture and Who It Leaves Behind by Fariha Roisin 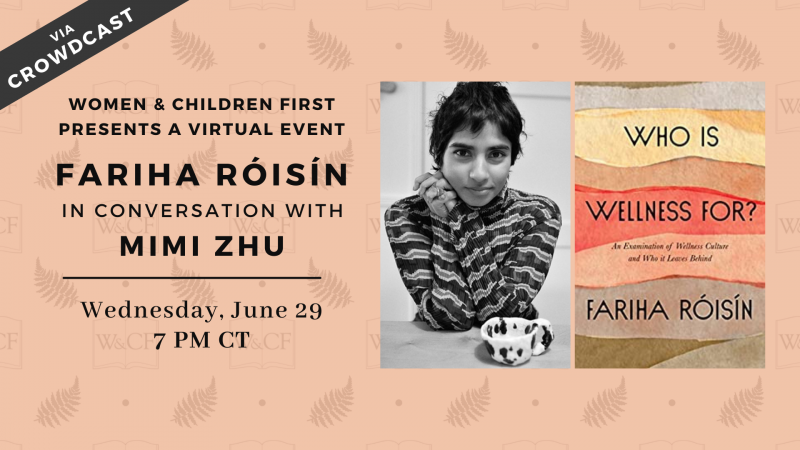 Join us for a virtual conversation on Women & Children First's Crowdcast Channel celebrating the release of Who Is Wellness For? by Fariha Róisín. For this event, Róisín will be in conversation with Mimi Zhu.

Growing up in Australia, Fariha Róisín, a Bangladeshi Muslim, struggled to fit in. In attempts to assimilate, she distanced herself from her South Asian heritage and identity. Years later, living in the United States, she realized that the customs, practices, and even food of her native culture that had once made her different—everything from ashwagandha to prayer—were now being homogenized and marketed for good health, often at a premium by white people to white people.

In this thought-provoking book, part memoir, part journalistic investigation, the acclaimed writer and poet explores the way in which the progressive health industry has appropriated and commodified global healing traditions. She reveals how wellness culture has become a luxury good built on the wisdom of Black, brown, and Indigenous people—while ignoring and excluding them.

Who Is Wellness For? is divided into four sections, beginning with The Mind, in which Fariha examines the art of meditation and the importance of intuition. In part two, The Body, she investigates the physiology of trauma, detailing her own journey with fatphobia and gender dysmorphia, as well as her own chronic illness. In part three, Self-Care, she argues against the self-care industrial complex but cautious us against abandoning care completely and offers practical advice. She ends with Justice, arguing that if we truly want to be well, we must be invested in everyone’s well being and shift toward nurturance culture.

Fariha Róisín is a multidisciplinary artist, born in Ontario, Canada. She was raised in Sydney, Australia, and is based in Los Angeles, CA. As a Muslim queer Bangladeshi, she is interested in the margins, liminality, otherness, and the mercurial nature of being. Her work has pioneered a refreshing and renewed conversation about wellness, contemporary Islam, and queer identities and has been featured in The New York Times, Al Jazeera, The Guardian, and Vogue. She is the author of the poetry collection How To Cure A Ghost (2019), as well as the novel Like A Bird.

Mimi Zhu (they/them) is a queer Chinese-Australian writer and artist. They explore the many intersections of love and fear, and they facilitate workshops that are dedicated to the healing power of the written word. Their work has been featured in The New York Times, PAPER, i-D, The Guardian, Printed Matter, VICE, and more. Their debut book BE NOT AFRAID OF LOVE is coming August 2022. They are based in Brooklyn, New York.

Who Is Wellness For?: An Examination of Wellness Culture and Who It Leaves Behind (Hardcover)