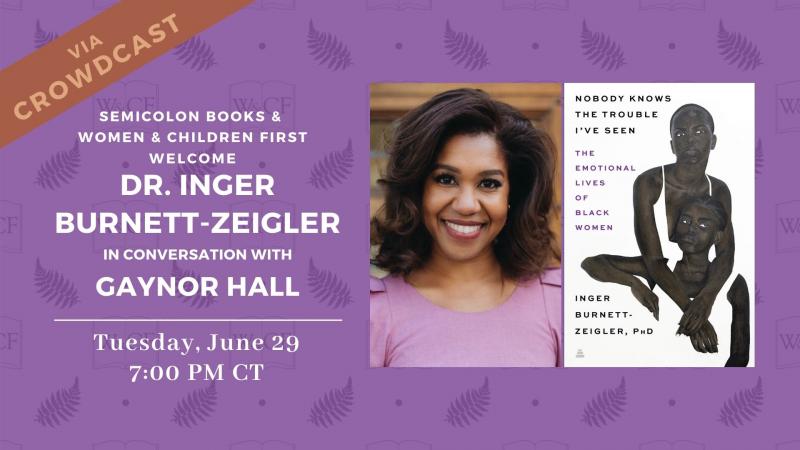 Join Women & Children First and Semicolon Bookstore on W&CF's Crowdcast Channel as we celebrate the release of Nobody Knows the Trouble I’ve Seen: The Emotional Lives of Black Women by Dr. Inger Burnett-Ziegler. For this event, Dr. Inger will be in conversation with Gaynor Hall.

Black women’s strength is intimately tied to their unacknowledged suffering. An estimated eight in ten have endured some form of trauma—sexual abuse, domestic abuse, poverty, childhood abandonment, victim/witness to violence, and regular confrontation with racism and sexism. Nobody Knows the Trouble I’ve Seen shows that trauma often impacts mental and physical well-being. It can contribute to stress, anxiety, PTSD, and depression. Unaddressed it can lead to hypertension, diabetes, heart disease, overeating, and alcohol and drug abuse, and other chronic health issues.

Dr. Burnett-Zeigler explains that the strong Black woman image does not take into account the urgency of Black women’s needs, which must be identified in order to lead abundant lives. It interferes with her relationships and ability to function day to day. Through mindfulness and compassionate self-care, the psychologist offers methods for establishing authentic strength from the inside out.

This informative guide to healing, is life-changing, showing Black women how to prioritize the self and find everyday joys in self-worth, as well as discover the fullness and beauty within both her strength and vulnerability.

Dr. Inger Burnett-Zeigler is a licensed clinical psychologist and associate professor in the Department of Psychiatry and Behavioral Sciences at the Feinberg School of Medicine at Northwestern University. She received her undergraduate degree in psychology from Cornell University, her doctorate in clinical psychology from Northwestern University and she completed a post-doctoral fellowship at the University of Michigan. Dr. Burnett-Zeigler has over 15 years of experience helping clients with mood and anxiety disorders, stress management, and interpersonal relationships. Dr. Burnett-Zeigler promotes mental health and wellness through mindfulness and compassionate self-care. She is an advocate for normalizing participation in mental health treatment and assuring that all individuals have access to high-quality, evidence based mental health care. Dr. Burnett-Zeigler’s research has been featured in the New York Times, TIME Magazine, and Chicago Tribune. She is a proud lifelong Chicagoan.

Gaynor Hall is an award-winning general assignment reporter for the WGN Evening News and the WGN News at Nine. She first joined WGN-TV as a freelance reporter in April 2008. A native Chicagoan, Gaynor is a proud alum of Whitney Young Magnet High School. She graduated Summa Cum Laude from Syracuse University, with a double major in Broadcast Journalism and African American Studies. Gaynor got her start in television as the morning anchor and producer at WMGT in Macon, Georgia. She returned to Chicago in April 2006 as an anchor and reporter for WGN-TV’s former sister station, CLTV. In 2015, she won a Chicago/Midwest Regional Emmy Award after several years of reporting on efforts to fix a failing Chicago high school. In 2017, she received a ‘Salute to Excellence’ Award from the National Association of Black Journalists for her 3 part series – Inequality in Chicago. She lives on the city’s South Side with her husband and two children.

Nobody Knows the Trouble I’ve Seen: The Emotional Lives of Black Women (Hardcover)