Virtual Paperback Release: THE TASTE OF SUGAR by Marisel Vera 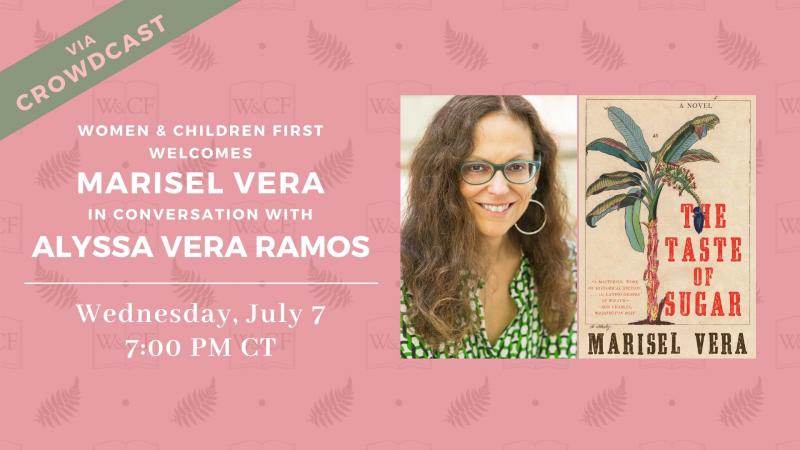 Join us on Women & Children First's Crowdcast Channel as we celebrate the virtual paperback release of The Taste of Sugar by Marisel Vera! For this event, Marisel will be in conversation with her daughter, Alyssa Ramos Vera.

Marisel Vera emerges as a major new voice in contemporary fiction with this “capacious” (The New Yorker) novel set in Puerto Rico on the eve of the Spanish-American War. Up in the mountainous region of Utuado, Vicente Vega and Valentina Sanchez labor to keep their coffee farm from the creditors. When the great San Ciriaco hurricane of 1899 brings devastating upheaval, the young couple is lured along with thousands of other puertorriquenos to the sugar plantations of Hawaii, where they are confronted by the hollowness of America’s promises of prosperity. Depicting the roots of Puerto Rican alienation and exodus, which resonates especially today, The Taste of Sugar is “a gorgeous feat of storytelling” (Tayari Jones).

Marisel Vera is a Chicago writer who grew up in Humboldt Park. Through her work, Vera explores the particular burdens that Puerto Ricans, on the island and in the diaspora, carry as colonial subjects of the most powerful country in the world. Her latest novel, The Taste of Sugar, is a tale of love and endurance on the eve of the Spanish-American War, told through two Puerto Rican families. The novel earned a Chicago Reader Best of 2020 award for "Best New Novel by a Chicagoan" category. Vera is also the author of the novel If I Bring You Roses about a Puerto Rican couple who migrate to Chicago during the 1950s Operation Bootstrap.

Alyssa Vera Ramos is a theatre maker, space holder, director, and culture worker dedicated to dreaming a liberated world-- and practicing living into that world every chance we get. Over the past decade, she has directed, devised, and co-written many plays (and workshops!) for many audiences throughout Chicago, with tours to Austin, New Orleans, and more. Alyssa is the Artistic Director of For Youth Inquiry (FYI) Performance Company, housed at Illinois Caucus for Adolescent Health and creating original, participatory theatre experiences to support the sexual health, rights, and identities of young people. She is also a founding member of femmes of color artistic collective, FEMelanin (documented in Ensemble-Made Chicago and featured at the LTC Sin Fronteras TYA Festival) and an organizer of Swarm Artist Residency, where she focuses on curating healing and racial justice experiences for Midwestern-based artists.

The Taste of Sugar: A Novel (Paperback)