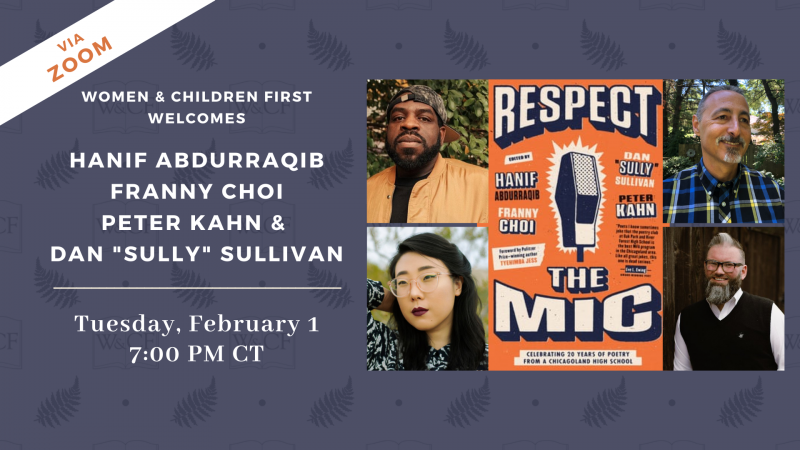 Attendees must register via Eventbrite. This event will take place via Zoom. Registered Eventbrite attendees will receive a Zoom link via email on the day of the event. It will be recorded and uploaded to Women & Children First's YouTube Channel for future viewings.

For Chicago’s Oak Park and River Forest High School’s Spoken Word Club, there is one phrase that reigns supreme: Respect the Mic. It’s been the club’s call to arms since its inception in 1999. As its founder Peter Kahn says, “It’s a call of pride and history and tradition and hope.”

In its pages, you hear the sprawling echoes of students, siblings, lovers, new parents, athletes, entertainers, scientists, and more –all sharing a deep appreciation for the power of storytelling. A celebration of the past, a balm for the present, and a blueprint for the future, Respect the Mic offers a tender, intimate portrait of American life, and conveys how in a world increasingly defined by separation, poetry has the capacity to bind us together.

Hanif Abdurraqib is a poet, essayist, and cultural critic from Columbus, Ohio. His poetry has been published in PEN American, Muzzle, Vinyl, and other journals, and his essays and criticism have been published in The New Yorker, Pitchfork, The New York Times, and Fader. His first full-length poetry collection, The Crown Ain't Worth Much, was named a finalist for the Eric Hoffer Book Award and nominated for a Hurston-Wright Legacy Award. His first collection of essays, They Can't Kill Us Until They Kill Us, was named a book of the year by NPR, Esquire, BuzzFeed, O: The Oprah Magazine, Pitchfork, and Chicago Tribune, among others. Go Ahead in the Rain: Notes to a Tribe Called Quest was a New York Times bestseller and a National Book Critics Circle Award and Kirkus Prize finalist and was longlisted for the National Book Award. His second collection of poems, A Fortune for Your Disaster, won the Lenore Marshall Poetry Prize. He is a graduate of Beechcroft High School.

Franny Choi is the author of two poetry collections, Soft Science (Alice James Books, 2019) and Floating, Brilliant, Gone (Write Bloody Publishing, 2014). She is a Kundiman Fellow, a 2019 Ruth Lilly and Dorothy Sargent Rosenberg Fellow, and a graduate of the University of Michigan's Helen Zell Writers Program. A recipient of numerous awards including the Holmes National Poetry Prize and the Elgin Award for speculative poetry, she co-hosts the poetry podcast VS alongside fellow poet Danez Smith. Franny has taught creative writing for over ten years in various contexts, including Williams College, the University of Michigan, Project VOICE, and Inside Out Literary Arts. She lives in Northampton, Massachusetts.

A former Chicago social worker, Peter Kahn has been an English teacher since 1994 and a Spoken Word Educator since 2003 at Oak Park/River Forest High School. His students can be seen in Louder Than a Bomb and America to Me. A founding member of the London poetry collective Malika's Kitchen, he co-founded the London Teenage Poetry Slam and, as a Visiting Fellow at Goldsmiths-University of London, created the Spoken Word Education Training Programme. Peter was a featured speaker at the National Council of Teachers of English's annual convention and runner-up in the NCTE and Penguin Random House Maya Angelou Teacher Award for Poetry. Along with Patricia Smith and Ravi Shankar, he edited The Golden Shovel Anthology: New Poems Honoring Gwendolyn Brooks, reviewed in the New York Times by Claudia Rankine. Peter's 2020 poetry collection, Little Kings, has poems featured in the London Guardian and The Forward Book of Poetry.

Image Description: A navy banner with a faint leaf pattern background featuring four photographs of the editors: Hanif Abdurraqib, Franny Choi, Peter Kahn, and Dan "Sully" Sullivan. In the middle of these photographs is the book cover image for Respect the Mic: the title of the book is written in a bold font, the cover is orange, and there's a large microphone in the center.

Respect the Mic: Celebrating 20 Years of Poetry from a Chicagoland High School (Hardcover)