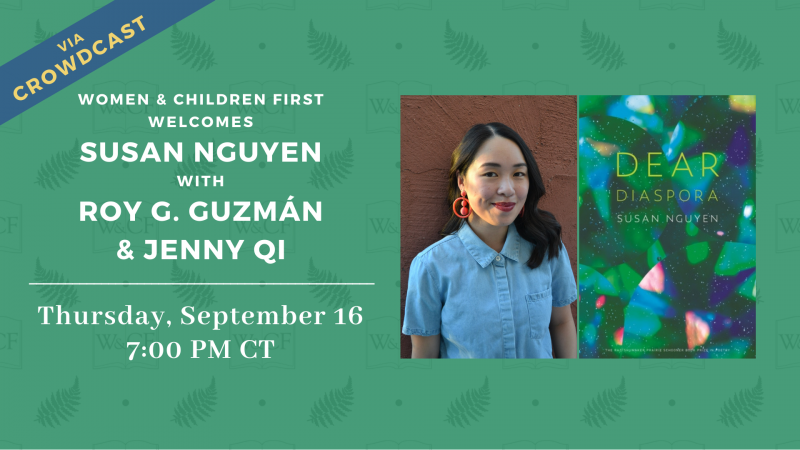 Join us for a virtual poetry reading on W&CF's Crowdcast Channel in honor of Dear Diaspora by Susan Nguyen. For this event, Nguyen will be joined by poets Roy G. Guzmán & Jenny Qi.

Dear Diaspora is an unapologetic reckoning with history, memory, and grief. Parting the weeds on a small American town, this collection sheds light on the intersections of girlhood and diaspora. The poems introduce us to Suzi: ripping her leg hairs out with duct tape, praying for ecstasy during Sunday mass, dreaming up a language for buried familial trauma and discovering that such a language may not exist. Through a collage of lyric, documentary, and epistolary poems, we follow Suzi as she untangles intergenerational grief and her father’s disappearance while climbing trees to stare at the color green and wishing that she wore Lucy Liu’s freckles.

Winner of the Raz/Shumaker Prairie Schooner Book Prize in Poetry, Dear Diaspora scrutinizes our turning away from the trauma of our past and our complicity in its erasure. Suzi, caught between enjoying a rundown American adolescence and living with the inheritances of war, attempts to unravel her own inherited grief as she explores the multiplicities of identity and selfhood against the backdrop of the Vietnamese diaspora. In its deliberate interweaving of voices, Dear Diaspora explores Suzi’s journey while bringing to light other incarnations of the refugee experience.

Susan Nguyen hails from Virginia but currently lives and writes in Arizona. She earned her MFA in Poetry from Arizona State University, where she won the Aleida Rodriguez Memorial Prize and fellowships from the Virginia G. Piper Center for Creative Writing. In 2018, PBS NewsHour named her one of "three women poets to watch." Her work appears in diagram, Tin House, and elsewhere. She writes a lot about identity, the body, and the Vietnamese diaspora and also likes to make zines. Her debut collection, Dear Diaspora, won the 2020 Prairie Schooner Book Prize in Poetry and will be published by the University of Nebraska Press in September 2021. Visit her at www.susanpoet.com

Roy G. Guzmán was born in Tegucigalpa, Honduras, and grew up in Miami, Florida. They are currently pursuing a PhD in Cultural Studies and Comparative Literature at the University of Minnesota, where they also received an MFA in creative writing. Roy is the author of the chapbook Restored Mural for Orlando and co-editor of Pulse/Pulso: In Remembrance of Orlando. Their work has appeared in Poetry, The Rumpus, Hayden’s Ferry Review, Best of the Net 2017, and Best New Poets 2017. Roy is a 2019 NEA Fellow and a 2017 Ruth Lilly and Dorothy Sargent Rosenberg Poetry Fellow. Their debut collection, Catrachos, is published by Graywolf Press.

Jenny Qi is the author of the debut poetry collection Focal Point, winner of the 2020 Steel Toe Books Poetry Award. Her essays and poems have been published widely in The New York Times, the San Francisco Chronicle, Tin House, Rattle, and elsewhere, and she has received fellowships from Tin House, Omnidawn, Kearny Street Workshop, and the San Francisco Writers Grotto. Born in Pennsylvania to Chinese immigrants, she grew up mostly in Las Vegas and Nashville and now lives in San Francisco, where she completed her Ph.D. in Cancer Biology and currently works in oncology consulting. At the end of graduate school, she co-founded and produced the science storytelling podcast Bone Lab Radio, where she wrote and talked a lot about death. She is working on more essays and poems and translating her late mother’s memoirs of the Chinese Cultural Revolution and immigration to the U.S.

A recording of the event will be available with closed captioning via Women & Children's First Youtube page.