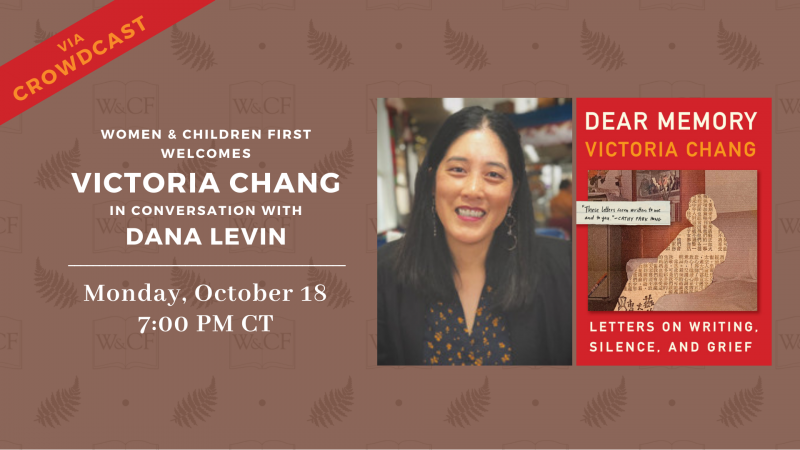 Join us for a virtual event on our Crowdcast Channel celebrating the release of Dear Memory: Letters on Writing, Silence, and Grief by Victoria Chang. For this event, Chang will be in conversation with Dana Levin.

For poet Victoria Chang, memory "isn't something that blooms, but something that bleeds internally." It is willed, summoned, and dragged to the surface. The remembrances in this collection of letters are founded in the fragments of stories her mother shared reluctantly, and the silences of her father, who first would not and then could not share more. They are whittled and sculpted from an archive of family relics: a marriage license, a letter, a visa petition, a photograph. And, just as often, they are built on the questions that can no longer be answered.

Dear Memory is not a transcription but a process of simultaneously shaping and being shaped, knowing that when a writer dips their pen into history, what emerges is poetry. In carefully crafted missives on trauma and loss, on being American and Chinese, Victoria Chang shows how grief can ignite a longing to know yourself.

In letters to family, past teachers, and fellow poets, as the imagination, Dear Memory offers a model for what it looks like to find ourselves in our histories.

Victoria Chang is the author of Dear Memory. Her poetry books include OBIT, Barbie Chang, The Boss, Salvinia Molesta, and Circle. OBIT received the Los Angeles Times Book Prize, the Anisfield-Wolf Book Award, and the PEN Voeckler Award; it was also a finalist for the National Book Critics Circle Prize and the Griffin Poetry Prize, and was long-listed for the National Book Award. She is also the author of a children's picture book, Is Mommy?, illustrated by Marla Frazee and named a New York Times Notable Book, and a middle grade novel, Love, Love. She has received a Guggenheim Fellowship, a Sustainable Arts Foundation Fellowship, the Poetry Society of America's Alice Fay Di Castagnola Award, a Pushcart Prize, a Lannan Residency Fellowship, and a Katherine Min MacDowell Colony Fellowship. She lives in Los Angeles and is the program chair of Antioch University's low-residency MFA program.

Dana Levin is the author of five books of poetry, most recently Banana Palace (Copper Canyon Press, 2016) and Sky Burial (Copper Canyon Press, 2011), which The New Yorker called “utterly her own and utterly riveting.” Her poems and essays have appeared in Best American Poetry, The New York Times, The American Poetry Review, The Nation, Poetry, and Guesthouse, among other publications. Levin is a grateful recipient of many fellowships and awards, including those from the National Endowment for the Arts, PEN, the Witter Bynner Foundation and the Library of Congress, as well as from the Lannan, Rona Jaffe, Whiting and Guggenheim Foundations. Levin currently serves as Distinguished Writer in Residence at Maryville University in St. Louis, where she lives. Copper Canyon Press will publish her fifth book of poems, Now Do You Know Where You Are, in Spring 2022.

All of our virtual events are recorded and viewable anytime on Women & Children First's Crowdcast Channel. The recordings are later uploaded with closed captioning to our YouTube Channel within a week or two of the event.