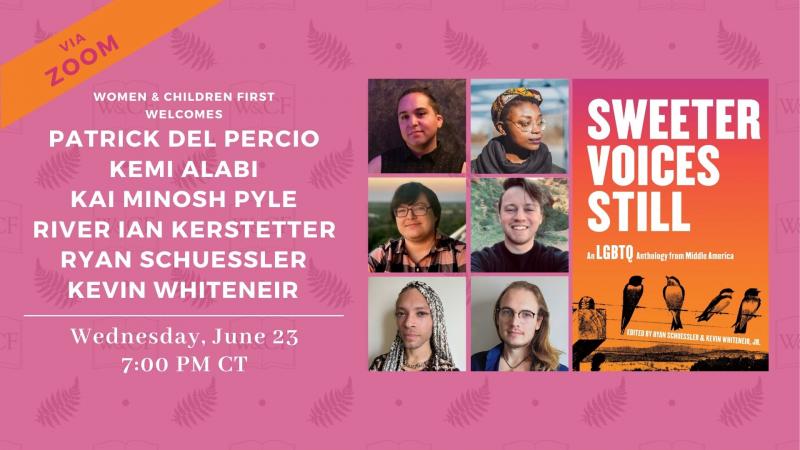 Join us for a virtual reading and discussion celebrating Sweeter Voices Still: An LGBTQ Anthology from Middle America. This virtual event will feature readings from Patrick Del Percio, Kemi Alabi, Kai Minosh Pyle, and River Ian Kerstetter. The readers will be joined in conversation by editors Ryan Schuessler and Kevin Whiteneir.

The middle of America--the Midwest, Appalachia, the Rust Belt, the Great Plains, the Upper South--is a queer place, and it always has been. The queer people of its cities, farms, and suburbs do not exist only to serve as "blue dots" within "red states." Every story about a kid from Iowa who steps off the bus in Manhattan, ready to "finally" live, is a story about a kid who was already living in Iowa. Sweeter Voices Still is about that kid and has been written by people like them. This collection features queer voices you might recognize--established and successful writers and thinkers--and others you might not--people who don't think of themselves as writers at all. You'll find sex, love, and heartbreak and all the beings we meet along the way: trees, deer, cicadas, sturgeon. Most of all, you'll find real people.

Patrick Del Percio is of Cherokee, Italian, and Irish descent, who grew up in northern Illinois and currently resides in Oklahoma City. He/They are faculty at the University of Oklahoma as a Cherokee language Instructor in the Department of Native American Studies. Patrick also serves as a Contract Translator for the Cherokee Nation Language Program and has taught Cherokee language courses for Northwestern University as well as the Chicago Public Schools’ American Indian Education Program. Through his/their teaching, writing and language advocacy, Patrick works to raise awareness of and create inclusive spaces for the perpetuation of Cherokee language, history, and culture.

Kemi Alabi is the author of Against Heaven (Graywolf Press, 2022), selected by Claudia Rankine for the Academy of American Poets First Book Award. Their poems live in The Atlantic, Poetry, The BreakBeat Poets Vol. 2, Best New Poets 2019, Redivider as winner of the 2020 Beacon Street Poetry Prize, and elsewhere. Alabi is coeditor of The Echoing Ida Collection (Feminist Press, 2021) and lives in Chicago, IL. Find more at kemialabi.com.

River Ian Kerstetter is a queer transfeminine artist, writer, and educator of Onʌyota'a:ka (Wisconsin Oneida) and European-American heritage, who grew up in occupied Pueblo lands (Central New Mexico) and now lives and works in occupied Odawa, Ojibwe, and Potawatomi lands (Chicago). Her work reflects her search for community and connection in a post-colonial world where queer, trans, and Indigenous people fight to be seen and safe every day. She works primarily in printmaking, design, writing, and collaboration. River holds an MFA in Interdisciplinary Book & Paper Arts from Columbia College Chicago and a BFA in Art Studio from the University of New Mexico.

Ryan Schuessler is a journalist from St. Louis, currently based in Chicago, whose work has appeared in Al Jazeera America, The Washington Post, The Guardian, The New York Times, National Geographic News, and The St. Louis Beacon.

Kevin Whiteneir, Jr., is an interdisciplinary artist and art historian. He holds a Master's Degree from the School of the Art Institute of Chicago in Modern and Contemporary Art History, Theory, and Criticism and a Bachelor's Degree in Art History and Anthropology from Ripon College. He lives in Chicago.