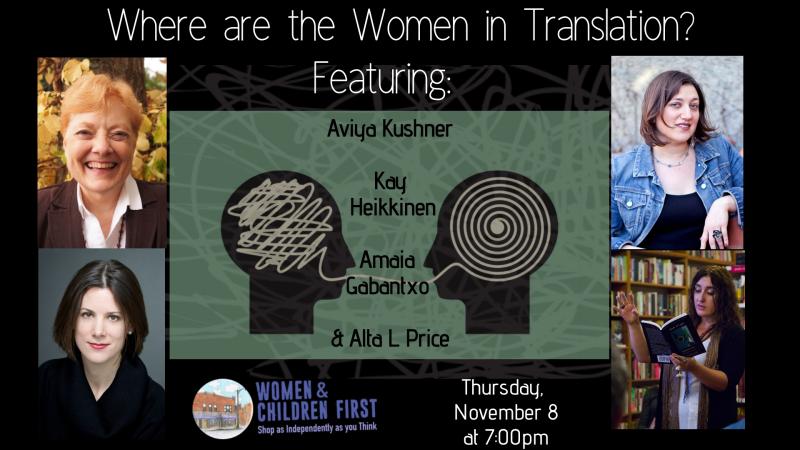 Of all the books published in English each year, roughly 3 to 4 percent are translations and, of those, roughly 27 to 30 percent are by women. For this event, a lineup of writers, translators, and editors will read poetry and prose from this often overlooked, always exciting, niche and then discuss the biases affecting translations published in the United States.

Aviya Kushner is the author of The Grammar of God: A Journey into the Words and Worlds of the Bible and the forthcoming chapbook Eve and All the Wrong Men. She is the language columnist at the Forward and an associate professor at Columbia College Chicago. She translates Hebrew, and her recent projects include work by poets Yudit Shahar and Rina Soffer as well as prose writer Ari Eitan.

Kay Heikkinen has studied medieval French literature and Middle Eastern history. She currently teaches courses in Arabic language at the University of Chicago and has translated five works of modern Arabic fiction; her most recent publication is Radwa Ashour’s The Woman from Tantoura.

Amaia Gabantxo is a writer, singer, and literary translator specializing in Basque literature. She teaches at the University of Chicago and, with her band Kantuz, is an artist in residence at the Instituto Cervantes in Chicago. Her most recent translations include Twist by Harkaitz Cano, A Glass Eye by Miren Agur Meabe (winner of the Omi Writers Translation Lab Award), and Downhill and Rock & Core by Gabriel Aresti, for which she was awarded the 2018 Etxepare-Kutxa Laboral Translation Prize. Her forthcoming album KANTUZ: 1931 will be released in December 2018.

Alta L. Price runs a publishing consultancy specializing in literature and nonfiction texts on art, architecture, design, and culture. She translates from Italian and German into English, is a member of Cedilla & Co., and serves as co-ambassador for the Chicago Chapter of the Authors Guild. Her forthcoming translations for spring 2019 include Martin Mosebach’s The 21 and Dana Grigorcea’s An Instinctive Feeling of Innocence.